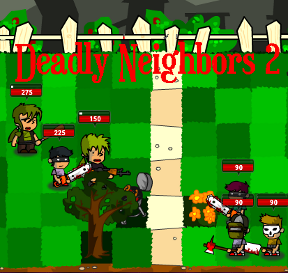 Most of us don't have much quarrel with our neighbors, I would hope, but even when we do take offense to them blaring The Safety Dance at 2:00 AM or drinking milk straight from the carton in their underpants on the front lawn, it usually doesn't devolve into a violent free-for-all. Usually. Nerdook's Deadly Neighbors 2 is a turn-based strategy game of disputes gone wrong as you control a family out to bring the hurt down on their neighbours. (Yes, with a "u". Leave me alone. It's proper.)

Create your pack of battlers, choosing from a variety of classes with different strengths and weaknesses, and then duke it out on the field (or in this case the yard) by maneuvering your family around screen turn by turn. The active character is denoted by a white ring, and blue squares are spaces you can move to, while red squares are occupied by enemies you can attack. Reduce your opponents to zero hitpoints to win and earn coins to unlock more classes, and upgrade points to toughen your own team up or allocate new abilities.

Deadly Neighbors 2 allows for the sort of casual strategy battling that's easy to leap into whenever you have a few moments, though you might wish it had done away with its coin-based unlocking system for a more traditional experience points/level up model. It feels like it's made to be played and enjoyed in bite-sized chunks, and if you like a more streamlined, pared down version of the combat found in Final Fantasy Tactics, then Deadly Neighbors 2 might be for you. Just remember, kids, this isn't the sort of behaviour you should be emulating. Or fashion.

What I can't figure out is where to move so that I can hit some of the opponents. If I'm standing right next to him, why can't I hit him? I've moved all over the yard, but nothing. It doesn't explain itself very well.

O.K game. I really miss the lack of storyline from the first and THERE WAS NO END JINGLE! (Sadface)

Usually a red box over the opponent indicates that you can attack, but with a first attack by a melee character you just have to move next to an opponent.

The strategy in this game is pretty simple.Use zombies, bruisers and Tinkers.

Zombies are a pain in the butt to kill since they can passively regenerate as well as drain health from enemy to heal. Also, they can summon other zombies for distracting and absorbing attacks. Finally, they can deal extra damage and effects when under certain circumstances.

Bruisers can absorb a whole lot of damage while also dealing tons of damage. They can tank down range and hit everything on the screen with their special ability. Finally, they can also heal by 50hp everytime an ally dies making them capable of making last stands.

Tinkers can shock others and heal themselves.They can also build turrets and make range units useless by "teleporting matter". They are meant to team up with a bruiser to kill the enemy efficiently.

Cats are fast, have a large movement range, and do great DoT with bleed. Their main strategy is to attack the enemy, then move away. They are lethal vs. ranged units, as they can get close enough to damage ranged units in mere seconds.

While a single cat can easily be killed by a dog, or by any unit that can move faster than it, multiple cats can lead the enemy AI in different directions, making it impossible for the enemy to retaliate.

Adding a pyro into the mix provides cover for the cats while they hit-and-run. In turn, the cats can lead the enemy into fires, or lead enemy units into close huddles, which the pyro can wreak havoc on with the upgrade that allows the pyro to set multiple adjacent enemies on fire.

I have found that taking multiples of the same class tends to get the best results. This is a bit counter-intuitive, but here are some examples:

3 Dogs - They all heal each other, especially with the face lick that give 60 health to the lowest member. So whoevers getting focused gets 180 extra health! With their counterattack ability, they can beat melee champions pretty convincingly.
Their multiheal allows them to survive vs long range teams long enough to close the gap and beat them down. Normally the enemy focuses 1 dude down, and the 1 target heal is extremly strong against this.

3 Cutter - Give all 3 resistance against ranged attacks, and their thrown daggers can inflict a good bit of damage vs the enemy melee DPSers before they can even engage. Plus when 1 gets wounded heavily, instead of just dying, he can stay back and toss daggers for the rest of the battle.

3 Pyro - Each one starts their own fire on every attack. Each one can get 1-5 bonus damage PER FIRE on the map! Each one can drop an ult that makes fires all over, or set 1 enemy on fire. Hence, after dropping a few fires everywhere the enemy steps, they get some INSANE attack power that literally allows them to overpower enemies with their ridiculous attack.

3 bruisers - crazy burst damage! Each one gets the extra attack on their first hit and they hit hard but slow. Three bruisers hitting the same dude can drop an enemy on the first turn! This gives a huge 3v2 advantage even vs 'better' class combos.

You can find similarly good comboes.