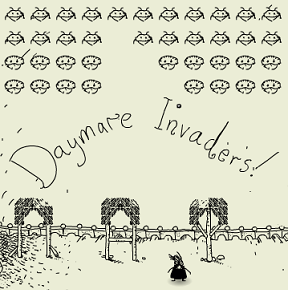 It's certain that we at JayIsGames are not the only ones eagerly awaiting the next installment of the Daymare Town series. In fact, it would not be too far to say that it invades our thoughts at every opportunity. If only Mateusz Skutnik would give us a release that would blast away the jags of withdrawal. Wait? He has? Well awesome, then! Daymare Invaders, an arcade shooter, isn't a particularly complicated game. Honestly, the game is little more than Space Invaders with a Daymare skin. But you know what? The hand-drawn art of the Daymare world is as hauntingly beautiful as it was when we first saw it. If you go in expecting anything more than a clone of an arcade classic, you'll be disappointed. If, however, you approach it aware of what it is (a classic minigame and a tantalizing preview of installments to come), you'll find a very tasty piece of eye candy. Now here! Watch as I fire upwards through our own shield!

THIS is what he's been working on instead of Submachine 8?

Such is the price of having a multitude of excellent game series going on at once with such a limited workforce. That being said, I'm sure he's capable of multitasking, so I'd bet good money he's been working on this AND Submachine 8 at the same time.

Sub8'll be along in good time; for now, let's just enjoy this goofy bit of goodness.

I just want to quote a comment I made on Halo and Pixy back on January 26th 2011;

"I do have to agree that our pointy and clicky saviour Lord Skutnik is being stretched a little too thin on some less appealing projects. This game and Sneak Thief are fun but I'd rather see a conclusion to The Fog Fall or Space Oddity or Covert Front.

I mean c'mon man! I escaped from the desolate town after the world ended, blacked out in the depths of space and flew a plane out of Zurich just in the nick of time... WHAT HAPPENS NEXT?!?!?!"

Since that comment there have only been 6 Skutnik games featured here, including this one. I don't want to be that guy who whines and complains. Instead, I guess I just want to know what's going on. Sorry Tricky but I have to disagree that this is a tantalizing preview of anything. We've all been starved of good Mateuszness for so long that any morsel seems delicious, but this space invaders thing is just... bad. Beautiful aesthetics without any substance.

Yes the design is gorgeous, of course it is, but if an unknown game designer put a pen and ink spin on a simple arcade game I doubt it would get a review on here. Is there ever going to be a conclusion to those other titles? Has M.S. run out of ideas or is he low on funds or making games for other people or what?

Sorry for the long comment, but it's only because Mateusz Skutnik is a brilliant game maker. Anything less and people wouldn't care.

Wait, what? Mixing Daymare Town with a shooter is one of those combinations that just doesn't... make any kind of sense... And as a shooter it's not even that interesting. I mean, I'm sure there are people who would enjoy it, as a mindless time filling kind of distraction, and there's nothing wrong with those kinds of games, but I typically expect a little more substance from the games at JIG. Actually, this would make a good Link Dump Friday entry, back before Link Dump Friday was changed, but with a stand alone review, it's kind of a disappointment.

Like you both say, it's a gorgeous morsel of a game by a popular and talented designer that some will enjoy in a mindless distraction kind of way. Doesn't that justify letting people know about it?

It better be "in good time," Onyx Mouse, because he already pushed the Sub8 release date back by several months (the endscreen of Sub7 said that Sub8 was coming in 2011), and then he said it would be February 2012 at the latest.

If it gets pushed back again, I'm going to start conflating this with the Half-Life series.

Oh man. I just realized the last Submachine game came out more than a year ago. And the last Daymare Town game was almost two years ago.

This just made me like ten times more impatient.

Dandy,
that's almost exactly what I said some time last year: Skutnik seems to try to bite more than he can chew at times. Which is not good news exactly because he has very good titles going on. If he kept concentrating on them, I'm sure we would all benefit from it... I mean I'm sure more time for a game would make it even better...

Wow. Seriously. Sometimes I wonder if this community remembers that these amazingly talented people provide us with FREE games to play. Even if MS never gets another Submachine out, are we really so shallow that we are going to just come on here and gripe about it? We have 7 others we can replay, not to mention the plethora of other remarkable games from this one artist alone.

Mateusz, in case you are out there, I love your work and appreciate everything you do for the gaming community.

I'd be more inclined to agree with dsrtrosy... if Submachine 7 hadn't left us with such a massive cliffhanger.

But my point, Sylocat, is: who are we to act so pettishly toward an artist who is providing us these wonderful and entertaining games for free? You would ONLY agree with me if the last one wasn't a cliffhanger? I don't think that's true! I think you ACTUALLY agree with me--some of the comments above are unbelievably selfish and should never come from this community.

Kindly don't tell me what statements I do and do not "actually" agree with.

Mateusz keeps us coming back time after time with the promise of more answers, more solutions, more plot revelations. That's how he keeps us giving him ad revenue and donations (do you think he's not making any cash off these games?). That's a legitimate tactic, and curiosity is a powerful motivating tool, but it also means people are going to get antsy if they are asked to go fifteen months without so much as a WIP screenshot.

And yeah, I'm more interested in the Submachine series than the Daymare series. I like plots and I like mysteries, and while Submachine is letting the answers trickle out with glacial speed, at least we know that there are answers to find. Daymare Town operates entirely on dream logic, and not only do we still not know what's going on, we have no sign that there even ARE any answers to find.

Well, it's April, and still no sign of Sub8. Not that I care, I already have all of the other SubGames on my computer and have been playing all of them trying to find all of the secrets (in those games that have secrets to find) and making video walkthroughs while I'm at it (yeah, I have a lot of time on my hands. :P) When Sub8 comes out, I know that everybody that loves the SubGames as much as I do will rejoice and then immediately play it, and I am eagerly awaiting that day. Keep up the good work, Mateusz.