There's a lot to be said for horror that leaves things up to your imagination, and RAC7's Dark Echo, a supremely unsettling sound-based stealth-game for your iOS, takes that to the extreme by making you rely entirely on the way noise interacts with your environment to navigate... and escape. Originally conceived as a game for Ludum Dare in 2013, in Dark Echo you control someone lost, unarmed, and blind in a hostile environment. To find your way to the exit in each level you need to use the sound of your footsteps to find your way around and avoid hazards. Tap and hold on an area and you'll see the footprints move towards it, while white lines radiate out from beneath them. Those lines will travel around and bounce off walls and other obstacles, giving you an idea of what your surroundings look like. Press and hold on your character's footprints and release to tap loudly and send out a great circle of sound from wherever you're standing, but beware... you're not alone. See, while dangerous spots are marked with red and should be avoided, some danger comes looking for you, and the more noise you make, the easier it is for you to be tracked down. You can quickly and repeatedly tap to make yourself creep and make as little sound as possible, but that makes it harder to navigate since you're making much less noise to echo off your surroundings. You'll need to be both quick and cautious to survive, and with 80 increasingly deadly and unnerving levels, your nerves may never be the same even if you make it out. Be sure to play with headphones, and turn the lights down low! 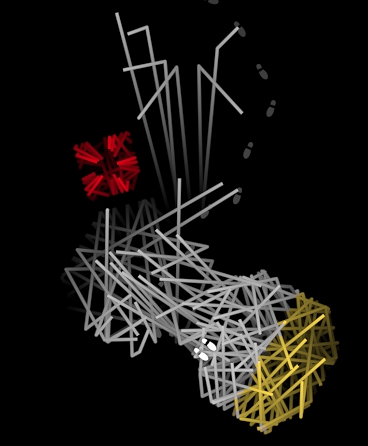 Sound can easily be overlooked when it comes to games, and many people underestimate the impact it can make on the player's experience. Few games rely entirely on sound to craft their tone and mechanics, but Dark Echo pulls it off almost flawlessly. Subtle things like the way something wet squelches beneath your feet while you pass through a cloud of droning flies, or the different sounds your footsteps make on different surfaces, serve to craft one of the most engrossing and tense atmospheres you're likely to come across. So much of what you come across is left to speculation, and the game is stronger for it, setting your mind whirling with possibilities with every new surprise you come across. Largely, the game plays very smoothly, though this is definitely not a title for the impatient. You can't move or turn around quickly, but that's likely to be expected if you really were someone blind and terrified staggering around in the dark. The repeated, frantic taps needed to creep can start to get annoying, but the levels are diverse enough that you never really feel bogged down with any particular mechanic for long. At a whopping eighty levels it still does feel a bit spread out at times despite the relatively small and compact stages, but it's so elegantly crafted and claustrophically creepy that it'll fly right by. If you're sick of the usual horror games that go for shock and the usual tropes, Dark Echo is the cure for what ails you. It's smart, sinister, and unsettling in all the right ways, making it perfect for any dark and stormy night... or any time you can pull the drapes and turn the lights off.

1,284 Views
0 Comments
jayisgames.com— Although kids may argue that mortal combat and GTA improve their hand-eye coordination, many parents deem video games an unnecessary indulgence that impairs a learner's attention to study. However, there are a handful of educational console games that are...  ...

How Trends Are Shaping Online Gaming in 2022 and Beyond

1,515 Views
0 Comments
jayisgames.com— Now more than ever, individuals of all ages and backgrounds are enjoying the convenience and accessibility of playing games on their computers and mobile devices, so you can be certain that the online gaming industry is here to stay. That...  ...

Why You Should Take Your First Steps in VRChat: A Beginners Guide

108 Views
0 Comments
jayisgames.com— There are plenty of games that let you explore new worlds and meet new people, VRChat has embodied this perfectly in a VR platform....  ...