Sometimes horror is subtle and psychological. SCP - Containment Breach releasing a statue that will break you if you break your gaze. The hazy hallucinations of a Lone Survivor. The desperate, puzzling attempts to wake from a Deep Sleep. However, sometimes horror is about a screeching anthropomorphic monkey thing leaping at you with a machete. Dark Deception, a first-person arcade Unity game demo by Glowstick Games is more akin to the latter. A demented mix of FPS-Man and that Scary Maze Game jump scare thing, this demo will jolt you awake and make you come back for more. Use the mouse to look around the hotel maze, moving with [WASD] and running by holding [shift], which you'll be doing a lot. You must collect all the purple soul shards before being caught by the monsters in the maze, and you have three tries to do it. 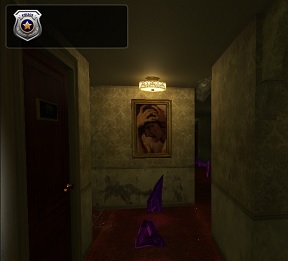 While the Steam Greenlight page for the game speaks of a decades long tale of suspense and scheming eventually backing up the gameplay, along with many more mazes and monsters, this demo doesn't really provide much context for what you are doing. However, that just makes it all the more disorienting and frightening in my opinion. Creepy never-ending hallway labyrinth! British woman taunting you! Nerve-racking music! That friggin' monkey thing chasing you! Yeesh! Actually, you may recognize said British woman's voice as that of Carolyn Seymor, AKA Mass Effect's Dr. Chakwas AKA Gears of War's Myrrah, AKA Zoey the evil Quantum Leap Hologram. Now I have another fanfic to write. It's a trip-and-a-half, and I can't even imagine what it'll be like with the planned Oculus Rift support. This demo for Dark Deception may overall come off as a mess of interesting parts that needs more development to fully coalesce, but that's kind of the point. Horror fans, or anyone who feels their heart rate is currently too low, should give it a play.

Scary as hell, but somehow less fulfilling than FPS Man. It's improved by the fact that

Slenderman style, the Monkeys appear to warp around.

Discovering that there are more than one of them

This is the evil offspring of Pac-Man and a fever dream. I love the voice acting but the line

gets old quickly. I wish the noise of collecting the soul shards was quieter, it's hard to hear where the monsters are when you're running through them. And there wasn't much of a payoff at the end for completing the level. Hopefully the full game will be more rewarding.

Has anyone found any secrets or figured out what the big red drawing is for?

Secrets appear to be found by

just checking every door you run by. Some doors break down revealing floating folders that probably are intended to unlock something in the full game. They don't do anything here.

I think the big red drawing just marks where you started. And the creators say that there are a lot more voice acting lines, they only put a few in the demo.

I've got to say, as well-done as it is (and it is), I really am not feeling the horror aspects. The music to me is kind of comical, and in the end all you're really doing is playing Pac Man in 3D (with three lives, even!)

Of course, I didn't find FPS Man creepy in the least, either, so maybe it's just me.

The portal next to you when you start uses the Silent Hill seal graphic. (aka Halo of the Sun)