Your settlers have not only arrived, but have started building their first little town. Life is colorful, everyone is happy, and in a few day--um...what is that glowing green hole in the ground? A HELLMOUTH? AAaaauuuuggghhhhh! Welcome to Damn Little Town, a new mobile tile-based card strategy game from Lumarama. Starting with a premise eerily similar to Carcassone, but then completely changing how play proceeds from there, Damn Little Town is set to become one of the most popular iOS card games of the season. Your initial goal is to build your town in as stable a manner as possible, and at first it seems important to coordinate with the other players/computer to finish buildings and complete roads. As with most map-style card games, the cards have to fit together in certain ways... a road can't connect to an outer wall, for instance. As you build, your settlers take up residence in the buildings following a set of rules in which you can't put one of your settlers in a building already occupied by another player's residents unless certain conditions have been met. With every resident you place, you gain points. It soon becomes apparent that the computer players are programmed to work against you as much as possible, and it doesn't take long to adopt an every-man-woman-and-child-for-themselves mentality. 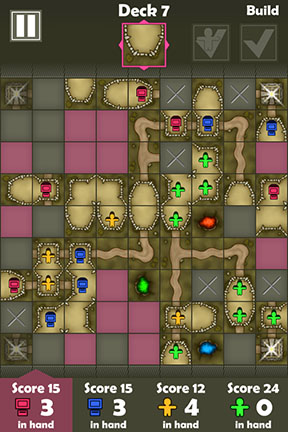 This becomes especially clear when all of the cards in the deck have been placed (or there are no more available spaces). At that point, the Escape Phase of play begins with a new deck... an evil deck. Monsters begin to pour out of the pretty blue, purple, green and red holes that have opened around the map, and you and your opponents have to place them on the board. At the same time, you have to devise a plan to get each of your residents with a clear path to one of the temples at each corner of the map. If you put a monster on a space where a resident lives, you knock that person out and the player loses points. Sometimes, you have to make a choice... kill one of your resident so that others can make it out alive. At the end, every living resident still on the board is worth points, and a final tally shows you which player has managed to save the most settlers.

Analysis. If you have played Carcassone, you'll immediately notice that the first deck in this game bears more than a passing resemblance to the Carcassone deck. While the size of the deck and playing space are considerably more limited, it seems that you have stumbled upon a Carcassone clone. But some differences are immediately evident. Depending upon the number of players, you begin with either 8 or 10 settlers, and since scoring depends on them, there is less focus on being sparing in your placement, and more on getting them close to exits or keeping them safe. Once that phase of play ends, all comparisons to the other game cease. 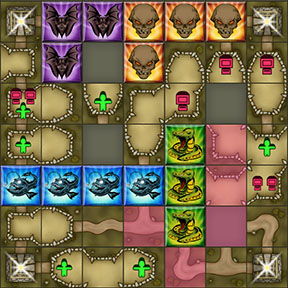 The lion's share of the strategy is based on what is coming after map placement... the Escape. Since you know that monsters will come out of the holes, you can begin to strategize around them once they start to appear. A completed building can protect your settlers to some extent, so finishing a building that has been cut off from an escape route might help. Opening new escape routes can also figure into a winning strategy. Luck of the draw definitely plays a satisfying part in the challenge of this game. Drawing three roads in a row may feel like a slap in the face until you realize you have the only open route to a temple. It definitely guarantees that every game is different.

If the game feels a bit incomplete, that's because online multiplayer and some limited edition content is still on its way. As a way to encourage both players and the developers, early adopters will not only get the full game at a reduced price, but are also promised access to the limited edition when it hits the iTunes store. And if you aren't interested in paying before the online multiplayer is available, you won't be disappointed with the polished artwork and sharp gameplay. The free basic game only limits the number of players and the size of the board, but features no other differences. Take on a friend or match wits with the computer and get your settlers out of that Damn Little Town!

Sounds like a combination of Caracassone and The Downfall of Pompeii (where you have to get your people out of the city after a lengthy placement phase).

Ooohhh...I'll have to check that one out, @Scott Seifert. Another review compared it to Survive, where you remove your settlers from a volcanic island. Now I'm on the lookout for other similar games, because this one was so well done!

Hello! Developer of the Damn Little Town is here. I just wanted to say that upcoming update 1.1.0 (very soon) will include Online Multiplayer and one gameplay tweak to make mistakes in the Build Phase a bit less "tragic" for the Escape Phase.

Also Limited Edition feature will be enabled only for the players who will get the Full Version before the first update. This is to say you Thank You.

@Elya Si - thanks for stopping by with the update!