Good seafood can be so hard to find. Cyberkat has a hankering for some digi-fish, and this electronic, supersonic feline isn't going to sit around waiting for his next meal to just fall into his bowl! Instead, he's going fishing with rockets and lasers in Adventure Cat's new shooter game, available for Android, iOS, and the browser you're reading this in right now. The big twist is not that the fish he's aiming for are in barrels, but that his entire adventure is controlled entirely with one button! Click (or tap) and hold the left mouse button (or your screen) to fly up, and release it to descend; Cyberkat takes care of the gunning on his own. This gives his buttery, shoot-'em-up adventures the extra, lemony zip of a jump-and-run game or an avoidance game. The streamlined control makes for a shooter that's incredibly simple to play, but make no mistake! There are some real lunkers waiting for Cyberkat on his fishing trip, and reeling them is no picnic. Cyberkat is one of those ever-so-elusive "easy to learn, hard to master" games, and that fact alone tends to be a pretty strong recommendation whenever it appears! 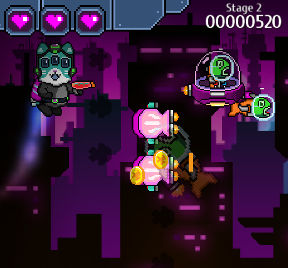 It's worth noting, right off the bat, that the mobile version of Cyberkat is fully twice as long as the browser version. Both versions have the same central conceit, and both have the same powerups and upgrades available to them. But the mobile version contains a full 32 levels spread across eight worlds, while the browser version has only half that, at 16 levels in four worlds. Unfortunately, the difficulty curve in the browser version still feels more balanced for a longer game. The challenge level of this edition ramps up dramatically after the first world, and money is harder and slower to come by, meaning it's quite possible to beat the game without ever being able to afford the highest-level upgrades. In some ways, this isn't so bad. All of the upgrades available to you offer different bonuses to your powerups, and some low-level upgrade chips even unlock different skills, so not every higher-level chip is strictly better than what you might've had. But it can be frustrating to get stuck on a particularly hard level, wishing for a more powerful basic gun or spreadshot that you simply can't afford. Both versions of the game cause you to drop all your collected powerups when you lose a life in a level, and this can lead to an "unstable equilibrium" issue where the more frequently you fail, the easier it is to keep failing. But despite this, Cyberkat manages to pull off the best trick any arcade game can: Even when you lose, you're instantly compelled to try, try again. The simple control scheme makes this game swiftly addictive, and makes you feel like victory is always within your grasp. Cyberkat is a tasty little game that's ready to please side-scrolling shooter fans, especially those who like a little more old-school in their difficulty level.

Not exactly sure what the point of the "build mod chips" screen or money are as you don't get the items you build on the next level.

Agreed. I gave up on this one quickly because you don't get enough coins/run, and the coins you do spend seem to not do anything.