You don't remember much... an explosion in a mine, someone dragging you away, a face in a doorway... but when you come to shackled to the floor in a dirty room, it's clear you're in a lot of trouble. A phone call from a stranger warns you not to trust the police officer who bursts in the door to rescue you a moment later. Who can you trust? What happened to the town? Cursed Memories: The Secret of Agony Creek is a hidden-object adventure from Vast Studios that plays like a mystery thriller, making for a surprisingly engrossing experience despite a relatively short length and easy ride along the way. Ultimately, your goal is to figure out what happened to you... easier said than done since everyone you meet seems to be vying for "Most Suspicious of the Year" and the town itself appears to be largely abandoned. Click around for clues; the game has two difficulty settings, for those of you who prefer to play without helpful sparkles and quick hint timers, but if you pay attention to your surroundings and explore you should be able to find your way regardless. The hint candles will not only point-out items in hidden-object scenes, but also indicate a place you're able to accomplish something in the current area. Just... for the future, in order to avoid being kidnapped entirely, maybe you ought to avoid places with portentous names like Agony Creek and stick to friendlier sounding places... for instance, I hear Cholera Canyon is lovely this time of year. 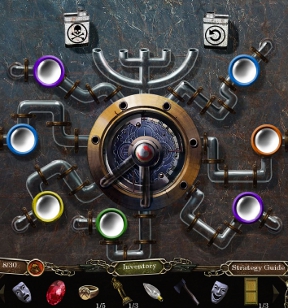 Analysis: There aren't a lot of games that manage to snag you as firmly as Agony Creek does in the first five minutes. It's rare to find a mystery game that actually feels like a mystery, and the plot works extremely hard to make it difficult to figure out who to trust and what's happening to you. The plot is fairly convoluted, with a big reveal that almost feels a bit trite compared to all the whodunnit build up, but there's still more than enough going on to keep you intrigued until the end with a lot of twists and turns along the way. The artwork is nice, despite some graininess and strange "animation, and the voice acting is actually surprisingly good, even if Vincenzo seems to be channeling Luis Sera by way of Ben Urich. (Minus the fascination with "ballistas".)

The game is, unfortunately, not the most challenging; some of the hidden-object scenes feel token and tacked on, while the actual gameplay and puzzles are enjoyable but so straight-forward most players will proceed at a quick clip throughout most of the game regardless of their chosen difficulty setting. An average playtime is likely around three hours, not counting the bonus chapter, and the story loses momentum a bit; it almost feels like the game should have been twice as long to really give the characters and story more screen time. Still, while it lasts Cursed Memories: The Secret of Agony Creek manages to craft an atmosphere of mystery and menace that few other titles in the genre can match, and will keep you guessing until the end. Strange, creepy, and even a little thrilling, it's a short but surprisingly well crafted little mystery that's worth checking out if you have an evening to spare.

Locations of all 30 Gold Pouches

Main Walkthrough
Note: While there are chapters in the game, it plays as one continuous scene with all old areas accessible at all times. Thus, this walkthrough is organized by goals instead.

GOAL: Get the car running.

GOAL: Rendezvous at the cabin

GOAL: Get into Agony Creek (Town)

GOAL: Rendezvous at the library

GOAL: Get into the mines.

Locations of all 30 Gold Pouches

Main Walkthrough
Note: While there are chapters in the game, it plays as one continuous scene with all old areas accessible at all times. Thus, this walkthrough is organized by goals instead.

GOAL: Get the car running.

GOAL: Rendezvous at the cabin

GOAL: Get into Agony Creek (Town)

GOAL: Rendezvous at the library

GOAL: Get into the mines.