Curse of the Pharaoh: Quest for Nefertiti

Another casual game that tries its hand at blending genres, Curse of the Pharaoh: Quest for Nefertiti takes two popular game types to ancient Egypt for a fascinating puzzle-adventure experience. The game's main tricks are spot-the-difference scenes along with a few simple hidden object excursions. You'll also unlock minigames and solve adventure-style puzzles using artifacts you find and assemble in dusty old tombs. It's a relatively easy game, making it accessible to a wide range of players, but the real hook is the deliciously mysterious Egyptian setting based on the real-life mystery of Queen Nefertiti's burial. 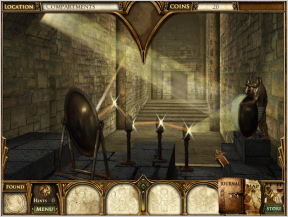 To start things off: Nefertiti. The ancient Egyptian queen was immortalized in texts, statues and busts only to mysteriously vanish from the records decades later. There are a number of theories on the cause of her death, but the truth remains unknown. Also unknown is the location of her body, which is where Curse of the Pharaoh: Quest for Nefertiti steps in. The game begins with protagonist Anna receiving a letter from her brother who has run into some serious trouble while searching for Nefertiti's tomb. He warns that if she doesn't hear from him again in two weeks, something has gone wrong. Three weeks pass with no news, so Anna boards a plain and heads to Cairo to begin her search. But she just can't shake the feeling that someone is following her every step of the way...

Curse of the Pharaoh is divided into a series of worlds, each taking place in a different location within Egypt. Worlds are further divided into a handful of individual locations containing ten differences you must spot between the two pictures. Each room has a special item you must also find along with a "locked" spot where an item from another room must be placed. You can move about the rooms in a world freely, allowing you to find objects and return to areas to place them at your leisure. Also watch for coins hidden in each room, used to purchase game-enhancing items and minigames in the store.

After placing secret items and finding all ten differences in each stage you unlock the special hidden object puzzle of the world, tasking you with locating a set of items identified by their shadows at the bottom of the screen. You'll also gather pieces of a pharaoh's mask in these stages to unlock the final level. Mask in hand, enter the temple to assemble/place the items to solve the puzzle and continue your journey. 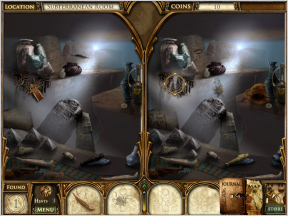 Analysis: A relatively short and easy game, Curse of the Pharaoh: Quest for Nefertiti compensates with carefully designed levels, gorgeous visual design, and an atmosphere so steeped in legend you can almost smell the tomb dust in the air. Two levels of difficulty up the challenge a bit, but the main draw is the atmosphere and sense of distilled fun you feel when poking around temples in Egypt.

One feature I feel is sadly underutilized is the in-game store. Coins you find in the spot-the-difference puzzles can be used here to buy minigames and a few items that affect how you play the game. For example, if you click too many times at random on the screen, the lights go out and you must search for differences with a flashlight. The store allows you to buy a bigger light, which helps considerably when you get click-happy. Beyond one or two useful items, however, the store goes largely unused. With a full inventory of items to buy, it would be a fun (and rather exciting) addition to the game.

I think "unbridled fun" might be overstating it a bit. It's a perfectly competent "spot the difference" game and an alright "hidden object" game, but the puzzle/point-and-click adventure parts are really subpar. Though they set the game apart, I think the game would benefit from being unabashedly itself (a difference/object game) rather than try to be stand out with a feature that is pretty poorly implimented.

I agree that the store is a great idea in theory, but not executed very well. Buying clues is a good idea, and additional "power-ups" (beyond the double cursor and flashlight) could be really cool and quite innovative for the genre. Also, making the coins a little more optional might add to the sense of accomplishment.

All in all, this is a fairly competent game, but I'd suggest an alternative (e.g. Cate West) first. There's nothing here that hasn't been done better elsewhere.

Was it just me or did the simple task of picking up the very first item (the yellow stick) in front of the house gates seem impossible? I tried it on another computer with XP as well and I had no problem.

I thought the point-and-click parts were a nice touch. They weren't the least bit challenging, but they tied the various stages together and made it feel like I had a logical reason to be looking for the hidden objects. As one who frequently thinks something along the lines of, "I'm trying to solve a MURDER. Why am I looking for an avocado?" the added coherence put the game head and shoulders above Cate West for me.

But this is really short. I'm thinking I nearly finished it within the hour demo.

Are there any good hidden object games that don't cost anything? Besides the Where's Waldo book at the dentist's waiting room, of course.

It was a kind of nice game, I think.
It kind of bothered me, though, that I couldn't easily find a way to exit to main menu, if it was even possible. I only tried once, and found out that I accidentally shut the game off.
The graphics are nice, but there is something I kind of like and don't like about them. And I don't really like how less and less.. I don't know what word to use. Less canon/realistic/believable the scenes became. I played until the beginning of valley of the kings or something, I think. All of the sudden -- random upside down pineapples and strawberries pasted onto the walls. What?
And I had this bug where my cursor was followed by the lock icon everywhere, even if I switched maps or went to the main map screen. Huh.

The game could have been quite some unbridled fun, but it was totally ruined by that auto-hint feature.

Will anyone *ever* use the store-bought hints? Surely not, because you just have to wait - or rather not wait because it kicks in after 20 seconds or so - for the auto hint to appear. And will anyone ever have to look a little harder (and 'hard' as in 'half a minute')? Or will anyone ever actually have a need for the new flashlight? Why should you click to often when the auto-hint already gave the difference away?

For me it was more like I was trying to find the difference as quickly as possible before the next auto-hint would again spoil it all.

If I would buy such a game only to have me rushed through the levels by that auto-hint I'd get quite frustrated. I can't see how this went through beta-testing. Or maybe there hasn't been any testing at all.

I can only strongly discourage anyone from buying the game unless you want a "click-where-it-glitters" game for three-year-olds.

Also the game was put together rather hastily, like Reibear said: The later levels look like they just c&p some pictures into an other. Compare this to the Mystery Series and you see how bad this game is.

If it wasn't for the affiliate money probably no gaming site would recommend it...

I tried to play the demo, but I couldn't get in it after it was downloaded. So, I bought it. Guess what? Still can't get into it. I think it would be an interesting and fun game if I ever get it to open. Any ideas besides contacting the company? Already did that and haven't heard back yet.

Ladybug - not being able to run the demo should have set off a red flag for you about your computer specifications not being adequate to run the game at all. Did you check the system requirements for the game beforehand?

Where did you buy the game from? If you don't hear back from them within another day or so, send me an email (left sidebar) and I'll follow up with them myself.

I know this is an old game but paid for it from B.F. and am so disapointed, I have used three names and get to a room say one with the chisel and can`t open the map to another place then the second time got the spider also can`t go to map to anywhere else.whats up with this game.

how do I get passed to the door in the saws screen. I have the bow,arrow,key and flashlight but nothing happens ?
(Is that the end of the game ?)

I am in the saw room did all they asked and still can't get it to do anything!! Did I do all of this for nothing....HELP

I am also in the saw room , how is the flashlight used?

put the flashlight in the statue's hand

I need help!!! I am stuck in the secret room of world 9. If anyone can assist me I would appreciate it. I am really enjoying this game but need and would like to go forward. HELP!!!

I'm at the Secret Room at World 9 and can't figure out what they want to do. I've clicked everywhere I can and can't figure it out. And, even tho it's been quite awhile since I've seen 3 yo, I like the game!

Tks for any help!