Curse of the Aztecs

You know those academics. Put two of them with opposing theories in a room and within five minutes you'll have fighting and hair-pulling that puts Jersey Shore to shame, amirite? Marshall and Galloway have never seen eye-to-eye, but when Marshall heads off after Galloway's expedition, determined to prove the other man nothing better than a glory hound feeding into sensationalist superstition, he quickly discovers there might be some very dangerous truth to the legends after all. The free indie adventure horror game Curse of the Aztecs, developed by four students named Luke Finlay-Maxwell, Gustavo Da Costa, Charlie Scott, and Jack Pickard provides a frighteningly atmospheric descent into a ruined temple where you'll come face to face with the most terrifying thing of all... *flicks flashlight on under chin* NO SAVE FEATURE. 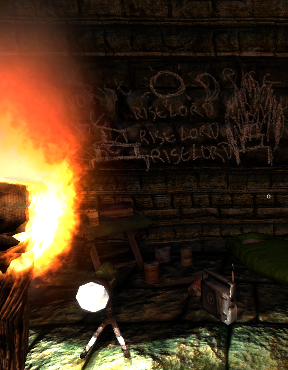 The game controls with [WASD] to move, and unfortunately lacks an option to rebind keys if that doesn't work for you. Look around with the mouse, and when the hand icon turns fleshy over nearby items, you can click to interact. Pressing [tab] will display your map, and holding [shift] activates HUFF-HUFF-NYUUHH-UUHNNFF mode, or "running". Your goal, ultimately, is to find the staff in the depths of the temple and use it to escape. The game also boasts that it's done away with scripted scares, meaning no two playthroughs should be exactly alike in terms of knowing when and where to brace yourself for the BOOGABOO moments. After a tutorial area to familiarize you with the controls and such, you'll descend into a maze-like area full of traps and... other... danger. Here you can gather treasure to boost your score while you look for the staff, and this area makes up the lion's share of the gameplay. Watch your torch for clues as to when you need to run, because if it turns bright blue and you're caught, it's game over for you. Just pretend you're Frodo wielding Sting and orcs are after you. You can choose to skip entire first "tutorial" area if you just want to get straight to the AIEEEEE meat-and-potatoes bit of the game too.

For a seven month project by four students, Curse of the Aztecs really is a remarkably well done game despite the painful lack of any sort of save feature or keyboard customisation. Though they consist mostly of ruined corridors, the visuals are great and the atmosphere is appropriately heavy with tension and isolation. Even the voice acting for Marshall is top notch, although the character often drips with such snide condescension you sort of want to punch him after a while. Maybe he wouldn't be so annoying if running for longer than ten seconds didn't cause him to loudly gasp and huff long after you've stopped. But despite being a bit rough around the edges, Curse of the Aztecs is one of those games that, in addition to being fun to play, really illustrates how far gaming has come when something that looks and plays like this can be completely free.

The downside is that after the tutorial, the game turns into less a puzzle adventure and more a straight-up action game with a bit of stealth thrown in as you try to evade the beast within the temple's depths while searching for treasure. It's sort of like Eyes - The Horror Game by way of Indiana Jones.That's not necessarily a bad thing, and fans of action and jump scares will enjoy what's on offer here, but going into this wanting or expecting a more carefully paced puzzle adventure may leave you wanting. Curse of the Aztecs, ultimately, is a game best taken with a grain of salt. It has a surprisingly effective repertoire of jump scares, and the combination of the beast on your tail as well as the other tricks and traps to be found can have you squealing and zipping around like a terrified pinball from terror to terror, giving it a great fun house of horror vibe perfect for turning the lights down low and the volume up.

Ha! The wackiness of the article really made me want to try this game.

"the most terrifying thing of all... *flicks flashlight on under chin* NO SAVE FEATURE."