A long time ago, in a galaxy far away, some jerk dad cut off his son's hand. Elsewhere in the universe, spaceships of dice are getting ready for some star battles of their own. In CUBICSPACE, a dice-based game of strategy and chance by Adam Atomic (Canabalt, Gravity Hook), you've got to survive six levels of deadly dice determined to destroy your ship. In each level you'll find eight "foe" red dice, plus four "laser" blue dice and four "shield" green dice, but how you handle each roll of the dice will determine your fate. 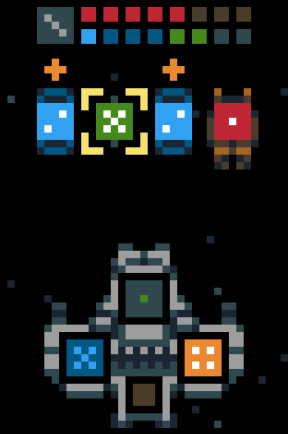 CUBICSPACE essentially plays like a dice-based version of the old card game War, where higher numbers beat out smaller numbers. Four of the sixteen dice will be randomly selected, rolled, and displayed above your ship. If you select a laser or shield die, it will be added to your ship's stockpile (maximum of six). When you select a foe die, you'll then have to choose whether your lasers or shields will take a hit from the foe. If you use your shields, the number on the foe's die will be deducted from it, but using your lasers fires your entire supply at once. If the foe die's value is greater than whatever defense you choose, you'll reduce the foe die's value by that amount, but you'll still have to finish it off by another means. If you get an unfavorable roll, your first move can be to click the orange die to reroll everything, selecting a new hand of four dice to face off against.

Surviving four salvos of four dice will move you to the next level, where the process repeats. The levels never get harder or easier, but without a strategy in mind, you might bleed yourself dry of resources before you realize it. Once you get the hang of the game, you might beat the game fairly easily, but there's still a challenge in getting a higher score. While playing, you also have the option of sacrificing three shields and three lasers at any time to give yourself a point, which acts as a multiplier at the end of the game, but you have to decide whether it's better to that or perhaps overstock on shields or lasers, which gives you a bonus reroll. Sadly, there's no online scoreboard for comparing your high scores with other players as of yet, but the quick and compelling nature of CUBICSPACE gives you plenty of motivation to keep trying to top yourself in astronomical combat.

It was interesting. I did not get the hang of it at first. I also started out a bit frustrated because the text was so pixelated certain letters and/or words were hard to read in the instructions. All in all it was a quick fun game once I knew what I was doing.

The look is nice, it probably lacks a lot of additions but there is potential