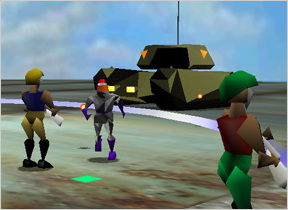 From the Pointzero Company, Cubic Exploding Goro is nearly as strange as the name suggests. This 3D action game from Japan puts you in the shoes of Goro, a grim angular anti-hero in a violent, polygonal Shockwave-powered world.

Run around each circular stage by pointing the mouse in the direction you want to move. Hold down the left mouse button to begin charging an explosion. As you charge the button a red field will grow around you; release the button to create an explosion inside the field, damaging any nearby enemies. Naturally, a larger field results in a larger explosion. Goro is vulnerable and motionless while powering up, but a decent sized explosion will launch him far into the air, avoiding any incoming lasers, bullets or giant enemy tanks. Press S to toggle sound on and off, and P to pause the game.

Analysis: Cubic Exploding Goro is weird, fun and, with over 24 levels and a wide variety of enemies, quite challenging. However, it is not an attractive game. The metallic rotating fonts are garish and the primitive 3D models look dated. There's charm in Pointzero's funky lack of style, though, and Cubic Exploding Goro is a great and unique arcade experience.

Okay.. someone has to do the bad pun.. so it might as well be me.

THIS GAME IS DA BOMB, YO!

Lol that was a VERY bad pun, Jackson. Lol!
This game is really cool! Lol!

Reminds me of that Orisinal game, Bugs.

cant really play it, but its nice optics, sound and though quite good ...

the main target in keeping the lift mouse button pushed, to blow em away is anoying after an hour ... but its maybe the beginning of a bigger game.

Killing the ______ on the little ship thing is harder than hell, any suggestions?
-MANAX

Did anyone else have problems with their computers freezing with this game?

The first thing I did when I started was try to charge it up as much as possible, and I think when it hit max, my compy froze. :x (this was in the 3D version)

I don't know if it ws a one-time thing or not, I'm not willing to risk freezing up my compy again. It might be my SiS video card (I have an Acer lappie), but I'm not sure.

Just thought I'd throw the warning out there.

The 2D version is a lot more fun, and they had to be more creative with the graphics to make it 3Dish. Plus the camera view and flying guys are really annoying in the 3D version.

I found that the 3D version has more fun. I don't have problem in running the game. (I got many memory for my pc :)

I played several level on 2D level and it is hard for me to estimate where I can have save landing. It is better in 3D, especially while you are dealing with the 'boss' in the final level.

By the way, the boss is another Goro, evil and more powerful.

But with a good timing and observing the pattern of his booming, you can beat him.

Remember, try to 'control' his moves.

As for the camera mode, you can select "fix" (others are "normal" and "back") before you start the game. It is the best view mode for me.

is it just me, or do the guys with the yellow hats and dust masks look like SARS protectors?

Hints:
The soldiers only shoot if you hold still long enough.
For the tank, concentrate on dodging when it attacks. The best time to blast it is right when it charges at you, but you'll need to begin charging right AFTER it's last attack.
For the flying dudes, don't use small attacks. They won't hit, and your flight will make you hit your head on them. You'll need to cut it close to get a good blast. Blast right when the enemy bombs are about to go off.

Cool. Finish all 24 stages and you're treated to a dance number: two dozen spacesuited goros sliding and swaying in front of a tank. Just like the whole game--weird, stupid fun.

I noticed that you don't have to blow up the tiny guys. Just run over them (or let them run up to you) and you kick them clear off the battlefield.

With the tank, if the turret center glows blue get over to the other side of the tank FAST! it will then fire a rotating lazer blast. WATCH OUT!!!

I love the grafics I like the retro feel of it.

Hum... I haven't been able to play either version :( For the 3d version I haven't been able to find the link to the game in the Japanese page (I end up in https://bbsoft.jp/Bbsoft where there is an orange button that does basically nothing when I press it). For the 2d version I get "Sorry, your platform is not supported." from the Shockwave download page. So, enjoy if you can! :)