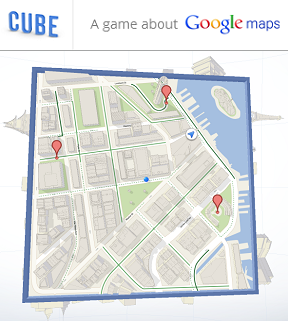 When it comes to checking out what your roof looks like, I think we can all agree that Google Maps is the best. (True that, Double True!) But beyond satellite zooming, it has a lot of other features that the makers wished to advertise. And, luckily for us, they went to those awesome advergamesters over at B-Reel to put something together. The result is Cube: A Google Maps Experiment. An HTML5 arcade webtoy, Cube takes maps from locales across the globe, then converts them into levels akin to those tiny metal marble maze toys. Moving your mouse about the pseudo-3D map to tilt it, you must guide your Google Sphere to the marked locations as quickly as possible.

Cube's design doesn't try to hide its advertising roots, for better or worse: The developers are obviously hoping that prettiness will help balance out slightly ephemeral gameplay. Still, the concept behind it is very clever the game is quite visually appealing in that Googley futuristic way, and the sound design is top-notch. Likewise, the features of Google Maps highlighted are well-integrated into gameplay, whether it's a traffic overlay showing which paths will give you a boost of speed, its subway guide that lets you teleport from tube station to tube station, or restaurant reviews giving you a list of Vegas hot spots you need to hit. In any case, as a game, Cube is smart fun, and as an ad for a tech company, it sure as heck beats watching Zooey Deschanel talk to her phone. Update your browser's WebGl, and get ready for the trip of a lifetime!

I got bored after two levels. That said, it is remarkably beautiful and pleasant sounding. And just neat.

Won't work for firefox either and I have the latest updates. Bummer.

Ironically, the second level just reminded me of some... uh... gaps in Google Maps' technology. It's true that it's safe to bike from the ballpark to Coit Tower to... a random tree in Hayes Valley (?) but it also involves some of the most death-defying hills in the city getting in your way. Lacking a topographical overlay, its SF walking suggestions are often brutal.

Those having trouble loading the game, make sure that you have the WebGL plug-in supported and updated:

I have the WebGL plugin, and that test page works fine. The game loads, and I can see the instructions - but the actual playfield never does, and is only a black screen.

The irony is, I'm trying to play this in the most up-to-date version of Chrome! If this can't play it, what can?

I don't know why you're having any issues with it, the latest version of Chrome on both Mac OS X and Windows 7 runs the game without any issues. You can try playing the game from here instead.