Cube and Star: An Arbitrary Love

Cube & Star: An Arbitrary Love is the kind of game you fire up when you know you want to play something but aren't quite sure what you're in the mood for. The delightfully abstract experience from Doppler Interactive puts you in a gray world and says "now go out and do stuff". That "stuff" involves bumping into trees, painting the ground different colors, knocking corners with other shapes, collecting some of the many strange items hidden throughout the environment, and just generally rolling around to see what you can see. Somehow, it's bizarrely entertaining. 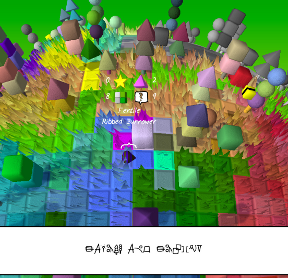 The world of Cube & Star kind of does its own thing. Other creatures walk around, trees and pyramids spring up, night falls, strange structures pop out of nowhere, and so on. There are some achievement-like goals to work towards such as collecting ancient relics, money tokens and journal entries, but otherwise you're not shoehorned into doing anything in particular. There's a simple language you can decrypt, or you can focus on painting everything and subsequently burning it to the ground. Whatever your strange sandbox desires happen to be, Cube & Star will probably accommodate you.

The more we talk about Cube & Star the less there is to discover. It seems a little aimless at first (which isn't necessarily a bad thing), but as you play you uncover some more traditional game-like features, so stick with it. It's easy to get frustrated with Cube & Star, but it's easy to get lost in it, too. Just keep telling yourself to relax. There's no right or wrong way to play. If you're a cube and you're standing there, you're doing it right. Now just start hopping around and see what you bump into.

I don't know why, but the floating pyramids seem... sinister. Granted, I've only been playing for about 10 minutes so far, but what they say makes me think they are planning something...