Just when Cthulhu was about to destroy the world, a mysterious figure appeared and locked away his powers. Only by becoming a true hero could he get them back, according to the narrator. Unfortunately for the world, Cthulhu took some courses in fourth wall breakage back at R'lyeh Tech, and he hears what the narrator says. Thus, Cthulhu embarks on an epic turn-based RPG quest in which Cthulhu Saves the World... so he can destroy it! Along the way he'll acquire a groupie, be stymied by dancing zombies, investigate cow abductions, and show a bunch of hideous terrors beyond the ken of man's pitiful mind what's what. 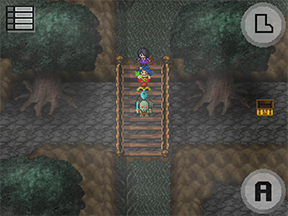 Cthulhu Saves the World really does a good job of boosting the strengths of classic turn-based RPG games and minimizing their weaknesses. Enemies get stronger every turn, and your MP recovery for beating them lessens, giving an incentive to end battles quickly, thus providing some of the urgency that this style of combat can lack. While the game utilizes random encounters, there's a limited number per dungeon, so if you're going crazy trying to find the exit in a dungeon, at least your frustration isn't exacerbated by constant interruptions. You can save at any time, and there are helpful exit-hinting torches in some of the more maddening mazes. The one uncorrected weakness of classic RPGs is in save slots: the mobile versions have a mere four, which makes it difficult to have a couple different games going at once. 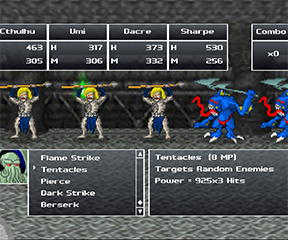 For this kind of retro, walking around maps, random encounters with turn-based battles kind of game, a controller is usually the ideal form of input. Adapting it to a keyboard isn't difficult, but adapting it to a touchscreen is much trickier. For the mobile versions, Tinkerhouse went with a primarily swipe based scheme with a few big on-screen buttons: an A button which generally functions as confirm, and a B button which generally functions as back. It's fair to say that it never feels as natural as either a keyboard or controller set-up, and when playing the game for a few hours at a stretch it can do a bit of a number on your hands, but it's hard to think of a different approach that would have avoided these drawbacks without having drawbacks of its own. For many players, the portability of a touchscreen device will outweigh these negatives anyway. This is a great game for playing a few battles on the bus or tweaking your party while waiting in line.

Cthulhu Saves the World is modestly advertised as having six to ten hours of gameplay, which for its price tag would be amazing even if that was all you got. Most players will find far more than ten hours of content here, however. Not only did the regular mode take your obsessively completionist reviewer much more than ten hours (must read every bookshelf!), but that's not even counting the bonus modes. Cthulhu's Angels, for example, contains all new dialogue, totally different all-female party, and many other surprises. Highlander mode gives you a one member party, and Overkill mode rockets you to level 40 so you can experiment which different skill sets, putter around maps looking for missed treasure, and other exploratory stuff. 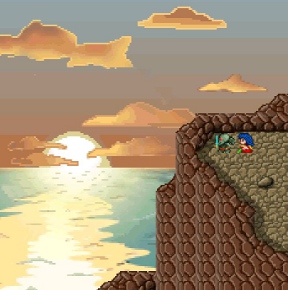 Analysis: Zeboyd Games originally released Cthulhu Saves the World for Xbox Live Arcade several years ago, followed by a Windows version which was met with much rejoicing, selling more in the first week on Steam than it had in months on XBLA. Now, Tinkerhouse has made an authorized port to iOS and Android devices, and it's a great treat having this gem of an RPG on the go.

For a game about a cosmic horror who literally drives enemies insane before destroying them with tentacle attacks and whose avowed goal is to annihilate the entire world, it's surprisingly gentle. Kind of... sweet, actually. While the pixel art visuals of some of the enemies are certainly grotesque, there's nothing here that will haunt your nightmares, and the script and plot seem almost designed to make you want to reach into the game and give Cthulhu a big cuddle-wuddle, just like his groupie Umi. The satire is never mean-spirited and the developers obviously love what they're sending up. It's funny, yes, but it's also a game that leaves you with a smile on your lips and a warm feeling in your heart. It may horrify a few Lovecraftian purists, but most fans will be charmed, and turn-based RPG devotees will adore it.

NOTE: This game was played and reviewed on an iPad and on Windows. Game was available in the North American market at the time of publication, but may not be available in other territories. Please see individual app market pages for purchasing info.