Every once in a while after playing a game I need to lay my head down on my desk and stare at the wall while I try to sort out just what it was I just experienced, and that's basically Cicada Marionette's bizarre fever-dream indie adventure game Crypt Worlds in a nutshell. In theory, you're playing a hero chosen to recover magical artifacts needed by a goddess to stop the resurrection of an old god. In execution, you run around, pee on things, and worship McDonalds parodies with wavering skeleton men in a deliberately low-res bizarro realm filled with talking televisions, pilgrims, and an infernal realm of nerds. Look, I don't know either. And I'm not sure if I genuinely enjoyed it, or I'm just too confused and disoriented to make sense of the world anymore, so now you have to play it too. 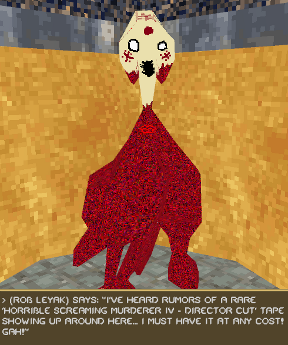 Use [WASD] to move around, the number keys to make selections in dialogue, and click on things to interact when up close. There is no combat, but if you... sigh... (no, I can do this, stay strong Dora)... If you have some urine, gained by collecting items and represented by the little yellow meter in the upper-left corner of the screen, you can right-click to pee on things. Hitting [ESC] will close the game, but don't worry... the next time you open it, you can continue right where you left off. You only have 50 in-game days to recover all the artifacts, which sounds like a lot, but finding them all is anything but straightforward.

Crypt Worlds is... well... it's something, that's for sure. It's going to be a polarizing experience, because just as many people will disdain it either for its deliberately low-res mish-mash aesthetic and patronizing send-up of tropes and gameplay concepts, as there will be people who love it for those very reasons and enjoy it as a result. There's certainly a fair amount to see, a weird potpurri of Earthbound's Moonside, first-person fantasy adventuring, and something like Hotline Miami meets Killer 7 for an experience filled with the weird, the funny, and the downright disturbing. It's bloody, it's gross, and it often doesn't make a lot of sense, and at times you can feel like you're having fun despite it, but, well... you sort of have to see it for yourself. Ultimately, I laughed, was perpetually unnerved, and often surprised, and for me at least, that makes it worth talking about. Even if "talking" in this instance typically means confused grimacing, gesturing wildly while you gape and make wordless sounds, and dead-eyed stares.

Dora, why do you hate my sanity so much?