Asteroids have long been the nemesis of creatures living on Earth. Just ask the dinosaurs. Or the makers of that gem of an arcade game, Asteroids. Or the NASA researchers who were trying to figure out if we'd get smacked with a big chunk of space rock in a few decades (spoiler: we won't). Crumble Zone from Rebel Twins understands that ancient fear and it capitalizes on it by letting you save the world over and over again by tossing little missiles towards the sky. With satisfying sound effects, a soundtrack that actually rocks, and plenty of things to unlock, it's quite possibly the most exciting asteroid defense "simulation" around! 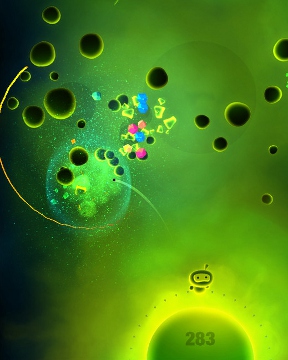 Standing on a small planet, you have two virtual buttons that allow you to walk clockwise or counterclockwise along the surface. A third button is your attack: launching a stone-looking missile into the air. Doesn't sound too menacing, but it gets the job done. Looming clusters of various asteroid sizes get closer and closer as time passes, but your pebble can smash them to bits if you time it right. Keep the skies clear and the planet's surface free from collisions and you'll earn some diamonds. Pick up as many as you can to unlock new special weapons that really give you an edge in the anti-asteroid campaign.

Apart from the main "get as far as you can, then start again when you die" mode, Crumble Zone doesn't offer any other means of distraction (except single-device multiplayer), just straight-up arcade gaming. There are no in-app purchases, which is always nice to see, and each of the unlocks are fueled by your performance, giving you plenty of reason to come back for more. The graphics and sounds were handled with professional care, The shifts in color, the subtle gradients, and the satisfying crumbling sound when you break apart an asteroid really makes the game something special. And when the gameplay itself is both tense and strategic, you really couldn't ask for much more from an arcade defense game!