It churns and bubbles and boils, covering the surface. So far, humanity has managed to stay but one step ahead of this all-consuming poison: a goo with no purpose but to swamp and multiply. Empires have fallen to it, and it cannot be stopped. But it can be delayed, and every day the human race earns is sweet enough reward as it is. Get ready to fear the creeper once more in Creeper World 3: Abraxis, the newest browser installment of the Creeper World real time-strategy series that stirs additional pylon constructing with Conway's Game of Life to make a primordial soup of fun. Being as it is an browser appetizer to get people interested in the Steam-released main course of Creeper World 3: Arc Eternal, it's no surprise the plot has a distinct prequel side-story feel. Join a robotic simulant of legendary hero Skarsgard Abraxis as he tests out situations you'll encounter in the full game... er "possible future battles". 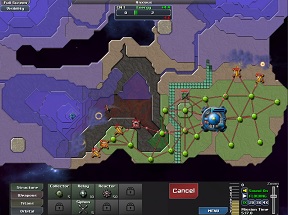 The main enemy, as always, is "creeper", a thick fluid that floods across the map, fueled by emitters that keep it flowing. Its movements are predictable. It creeps around hills and through valleys happily submerging anything in its path, including your base. Its strategy is limited, but capacity for generation unending. Destroy the emitters, though, and humanity has a chance at retaking the planets it affects. Each level starts with placing a command base of operations, preferably on high ground. Powering your siege will require connecting collecting nodes placed and linked around the map to mine Build Packets out of un-crept upon earth. These nodes send energy to your command module, which then sends it out to various weapons, like the fast-blasting Pulse Cannon or slower-but-impactful Mortar Launcher. Using weapons to hold the creeper at bay will allow you to claim more ground for energy collection, meaning more energy to power new weapons and moving existing ones to new locations. Once you get in range of the creeper emitter, you can build a Nullifier to eliminate it. It'll require a lot of energy, though, so keep your supply lines moving and your weapons powered. Eliminate all enemies on a map and you've completed the mission! Later levels will unlock new structures and weapons, like energy-creating Reactors, Ore Extractors, Sprayers that can convert ore into a similarly-flowing-but-on-your-side Anti-Creeper, and Terraformers that can change the lay of the land to your advantage, and new enemies, like Creeper Spore Launchers, to vex you.

I first encountered the Creeper Series in its Creeper World 2: Academy variation, and while I am sorry to see the unique side-view and its physics go, I have to admit that the return to the top-down view of the original Creeper World gives a more natural war-room-like presentation, if a somewhat more visually imposing one. Though definitely welcoming to new players (if a little light on documentation), be warned that it is a game that will soak up a lot of time, tailor-made for the kind of strategic gamer who prefers sieges to blitzkreigs, or tower defense fans who want a bit more of an active experience. It's hugely satisfying to claim victory after a protracted battle and it's always a nail-biter right up to the end. You'll be left wanting more, of course: more maps, to make your own mission, to see how the Creeper World community is pushing an engine to it's limit. That's part of the point of Creeper World 3: Abraxis was created. But either on its own merits or a teaser to something more, it is a worthy installment, and you don't need to be Homer Simpson to see the merits of free goo. (Mmmmm.)

Wait, they went back to the top-down view? I thought they were going to invent some whole new play mode for CW3, like they did with CW2.

What was the point of even making a new game? Why not just release another expansion pack of the old one?

I wasn't a big fan of the side-cut CW-2. I'm glad they brought back the top down battle.

i am having issues playing this on google chrome, got the no plugin error. can anyone help me ?

@Sylocat: So you're basically saying "Same top-down view = same game"? I hope you know what you're saying, because you're not making any sense at all.

There are so many things different between them that I can't possibly list, but the most important thing I think is the CRPL (Creeper Reverse Polish Language) that allows you to script in functionality you like.

But, I'm only eight or so levels in, so maybe it introduces some actually-new element at some point.

@Sylocat: the actual game (maybe not the demo, I'm not sure) seems to have 2 new enemies (Digitalis and Runners, maybe others). Plus, they're actually trying to make some money here (not that I can blame them - it's a terrific series)

I'm not sure what the object of 'Listen' field is. I destroyed all the nodes and spore spitters and never got the 'Mission Accomplished' screen. There wasn't anything left for me to kill.

they do have digitalis and runners in the demo

On the fifth field, Listen, you have to link the small circular thing to a collector so that it can blast off. Then you get the 'Mission Accomplished' message.

I'm really struggling with "Override" - any one got a hint?

Override took me a really long time to figure out too. All you have to do is:

Place a command center next to each of the 3 enclosed "pools" then place 2 mortars next to each pool. The pools will be gone in a few minutes!

Any tips on Experiment?

You want to make sure it's paused at the start until you have formations set up.

You want one of your command centers near the siphons and the other in between the top row of islands and next row, in the middle.

Immediately at the start, place siphons on the energy reserves. Connect the two command centers with collectors.

Use a relay network to reach the survivors. With proper placement, you'll be able to rescue all but one of the survivors before the creeper takes out your network. Build weapons on the way, preserving as much of the network as you can.

It might take a few tries to get the network right. Took me three tries before I succeeded.

Use sprayers and other weapons to stave off the creeper

Other goals:
The Last Survivor

Once it looks like the creeper's threatening the last survivor, use strafers to protect the survivor

The forge is incredibly useful here. Also, sprayers are critical to expansion.

For other stuff, trust your instincts.

Thank you Thomas for the help.
(I fixed the spoiler tags)