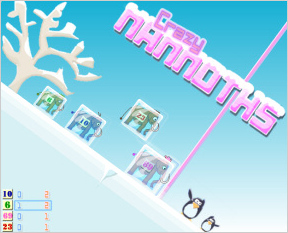 Another simple but madly enjoyable game has recently been released at Pepere.org, creator of Capsules, Ringmania, and a number of other physics-based games. Crazy Mammoths is a racing title where your only action is to jump over other players and try to stay at the front of the line. Physics play a huge part in the game, as the slope you're on tilts as you slide, forcing you to cope with changing gravity and direction. The friction is also greater when you're at the front of the pack, slowing you down and allowing stragglers to keep up with your pace.

The strategy in Crazy Mammoths comes from your cunning use of jumps. If you time it right, you can prevent other racers from overtaking your position by bumping their ice block from below. Leaping over competitors is as equally cerebral, as one false move and you might find yourself in fourth place rather than first. The tilting landscape alters your speed and direction and adds an element of excitement (and randomness) to the game that keeps you on your toes.

In addition to the normal championship race, Crazy Mammoths includes a challenge mode that offers different tasks for you to complete. One of the best features is a 4-player local multiplayer mode where you and your friends can race against each other using the same keyboard. Getting that many humans to share one keyboard is entertaining, but let them control frozen mammoth blocks racing down a slope and you have something beyond crazy fun.

An elegant release from Pepere.org that's as intriguing as it is simple fun.

The link doesn't work for me- I can't find where to play it from once I've clicked it. (I pressed the large play button on the right, but nothing happened. Do I need to register?)

wylie.conlon - although I have great appreciation for JP's game development efforts, his web design skills (at least from a usability perspective) leave much to be desired.

You need to scroll the page to find the "PLAY" button and then click it. Only then will the game load for you in the window.

Yes, I clicked that. But where's the game loading? I still don't see anything.

The page loads via javascript. Do you have javascript enabled? If not, that's likely the problem.

I think I found the problem- it's not designed for Safari. I'm using Firefox now and it works fine.

That was going to be my next question (i.e., what browser are you using.)

He's doing some DOM manipulation when the user presses the PLAY button, which hides some things and makes the game appear. It's interesting at best.

I like the game, but the difficulty on the later levels comes from your opponents having much better talent than you, so if you're the type (like me) who learns from watching what the opposition does and trying to mimic it, that strategy will not work. In fact, I have yet to beat the last race.

this game makes me feel... queazy... when the slope changes and the mammoths slide back and forth, sorta gives me a headache... lol... maybe it's just me?

This game is rather brilliant, just for having such an engaging experience with just one button. Against real people it's all about mind games, and tricking the person to just when it's disadvantageous. Pretty clever, all in all.

I didn't know there were a problem with safari. I'm very sorry about this and I apologize to all mac users. Nevertheless, it's very difficult for me to test it as I don't have a mac and swift (safari for windows) cannot be trusted. Is there a way somebody can post the error reported by the javascript console on your mac ?

This is not complex javascript, it's just a block becoming visible and another being erased. I'm sure it could work on mac...

I know the design of pepere.org is really bad. I have many difficulty to change this because it's an old website, that has been done without using the standards and without a strong conception (many things were done using copy/paste :) ). That would be really a pain to change all this now but one day...

I'm annoyed. League 1 in Championship is nearly impossible for me. I'm too small to jump over the big guy. Number 33 has too low a jump for me to just slip under him, but is too big so I can't go over him...

If the game were a -little- easier, or more balanced, it could be better. It's a nice game over all.

I just won all three championship leagues!
I found the later ones to be easier than the first one.

Against the larger mammoths, it is nearly impossible to jump over them - just wait behind them until they jump, you slide right underneath. When you are in front of a large one, it is easy to block their jump with correct timing.
This is harder with the smaller ones (and that's why the later levels are easier, in my opinion), but those you can at least jump over.
Also try to use the mammoths behind you to propel you into first place, jump at the right time when they are jumping, they bump you forward.

Pretty easy until I got to the last race. The last one was a bit frustrating...larger elephants seemed to be able to go faster and jump farther than me (actually this seemed to be the case for the small ones too).

One would be following me and then all of a sudden jump up and fly by me.

Anyway, I had to beat it. So now I can get back to work!

This reminds me of a move from the movie Talladega Night: Shake and Bake

I've never hated a game so bad in my life. This is a game of three on one.

On at least the third championship round, I found a decent strategy. I still have not beat it so it is not the best but it works to some degree. My trick is to be in third place when I am not in first. The second place mammoth jumps to take the lead, then the first place one jumps to block and about 75% of the time, if I got the right speed going, I slip right into first underneath both of them. Number 33 is easy to hold off because he has a low jump but the other two are a MAJOR PAIN!!

Neat but incredibly frustrating. I've had races where half the lines were won solely because one of the other races jumped from a couple block-widths behind me, over and well out of my range, and landed several block-widths ahead of me and accelerating. No chance of even touching it. I've also had a couple instances where another block won a line because it was on top of me, even though my nose was ahead of its nose.

On the other hand, it's pretty cool that on championship League One (at least; probably the others as well, but I spent the most time trying to win on this level) the other racers each have their own 'personalities' -- and therefore strategies to use against them.

...makes it incredibly useful defensively if you're in first and it's in second. Always wait and jump immediately after it does. If you time it right, it'll hit you in the back side in the air, giving you a boost forward.

...is a lot tougher, but it can be used as a blocker too. You do have to anticipate this one; it tends to jump from between maybe a half a block width and a full block width behind you. If you wait until it's jumped, it'll leapfrog you and you won't touch it, but if you time it right, it'll hit you in the back and give you a boost forward.

As for passing other blocks,

don't bother trying without help. Your opponents will block you about 90% of the time, and there's a decent chance you'll end up in a much worse position than you were. You pretty much need another racer to boost you forward or to tangle up the block you're trying to pass.

Yes a great game, however it's somewhat silly how every other mammoth can outjump you, and some if you were racing 1v1 you would have a 0% chance to get any lines at all..

GREAT one... really neat and funny.

Funny, because I always move my head in the direction the race track falls.... makes me look like an idiot. A smiling idiot.

I will keep playing it the whole weekend...

Ack!!! i cant figure out how to jump please help me!!!

Thanks, but now when i go to play it doesnt work...it doesnt have a place for the game to be at all. Please help!!!