It's been a while since we've seen serious activity from Kloonigames' Crayon Physics games. From its debut as an experimental project in 2007 to the release of Crayon Physics Deluxe a few years later, the crayon-drawing physics/puzzle game went from being a neat-o toy to OMG WANT MORE. And now, not too long after its initial mobile release, the game has fully grown up and is ready for its HD iPad debut, sporting a few nice extras along with the visual upgrade. 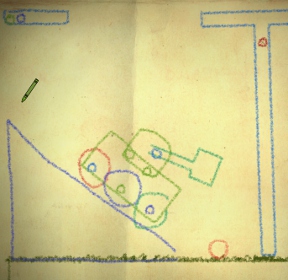 As the game reminds you from the outset, "It's not about finding just any solution. It's about finding the awesomest one." While it may be a relatively simple thing to move the red ball to the star in each level, getting it there with style and creativity are two very different matters. By tapping and dragging the screen you can create solid objects of just about any shape or size. Most of the time simple boxes, triangles, circles or rectangular bridges will suffice, but occasionally you'll be required to get creative with your gap-covering techniques. Make the territory safe, then either tap the ball or drop something onto it to set it rolling. Then, cross your fingers and hope your crayon skills are sound.

Crayon Physics Deluxe HD looks a little better than its non-HD predecessor (or maybe it's our imagination), and the interface feels a little snappier, too. The stock set of 70 levels will keep you busy for quite a while, and when you can't draw another crayon polygon, head over to the level editor to make your own stages. By, er, drawing more polygons, but it's different, y'know? You even have access to hundreds of user-made levels, though the process requires free registration and is a little awkward to initiate. It's hard to go wrong when both crayon-drawn levels and physics puzzles are involved, and even though this game is a few years young, it's just as creative and cool as ever.