Take a sprinkle of Don't Starve and stir in with generous amounts of madcap science-fiction, oddball humour, and a whole lot of smashing, and you've got indie action adventure Crashlands Butterscotch Shenanigans, available for PC or Android and iOS, with cross-platform play when you own both desktop and mobile versions and sign up for a free online account to transfer saves. The game stars Flux Dabes, the cheeriest little space-faring delivery truck driver/barbarianess you ever did see, whose mission to deliver some packages goes awry when an evil giant head rips her spaceship apart for his own uses. Now Flux, together with her trusty robotic sidekick/supervisor/sass-maker JuiceBox, must survive on the planet while figuring out how to send a message to the Bureau of Shipping to get her packages delivered. With fantastic humour and character design, randomly generated terrain, and an entire alien world to craft, fight, tame, and eventually even mod your own stories in, Crashlands is a powerhouse of an adventure that's worth every second of your time. 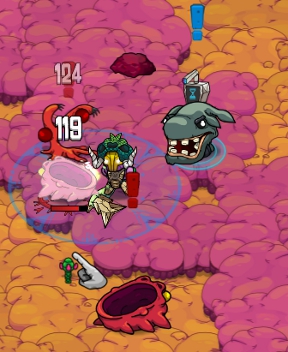 Playing Crashlands is actually pretty simple whether its on a mobile device or your desktop. Click (or tap!) on things to interact with them, be that by harvesting, talking, or stabbing, or click on the ground to send Flux traipsing merrily in that direction. During battle, Flux will automatically attack whatever you click on until its dead, but since enemies display the range of whatever attacks they're about to unleash in red patterns on the ground, you'll still want to move her around to avoid taking too much damage, though if she dies, she'll just respawn back at home base, minus some resources. When enemies are slain, they'll drop things you can use to craft useful equipment or other items, and most of the plants, rocks, and other things you see in the wild can be harvested too, though you'll need the right piece of equipment to do so. You'll get crafting blueprints as rewards for completing quests, but you'll also just find them randomly by exploring and destroying things, so get smashing! You can even find eggs from various creatures, hatch them, and take them with you to fight, or feed them back in the nest to have them generate special crafting ingredients. 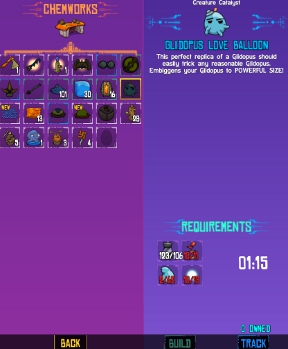 Crafting itself is fairly simple. You need to be able to build different stations to handle different materials, and as long as you have enough resources to build something, you can do so with a click. Some of the things you can make are decorative, should you wish to build Flux the sprawling manor she so deserves, but far more are useful, ranging from various healing items to more powerful equipment. If you're making weapons and armor, the statistics of the item are always randomly determined to a certain degree, so try crafting multiples of something to compare. Stone equipment, for instance, will always be preferable to wooden, but two stone helmets might offer different amounts of health bonuses, varying degrees of protection against special types of attacks, or even other abilities like regeneration. Of course, as you wander, you'll find out that Crashlands is big. You just won't believe how vastly, hugely, mind-bogglingly big it is. Luckily, Flux will find various teleporters that can allow her to pop around the map as she activates them, which is handy for completing quests or just returning home, and these can be accessed at any time from the map as long as you aren't, you know, being chewed on in combat. 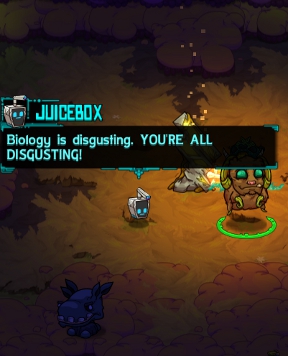 I can't think of another game I was smitten faster with in recent memory than Crashlanders. From the bouncy, carefree way Flux bounces/slaps/stabs her way through the land to the hilarious far more often than not dialogue, Crashlands is a game that wants you to have fun with it in every conceivable way. It doesn't hurt that everything about it is inviting to practically anyone of any skill level or experience to just jump right into and start enjoying right away. Things like Flux's infinite carrying capacity, fast-travel, and low-penalty respawn make Crashlands about as user-friendly as you can get, and the dialogue and characters make Crashlanders shine like a beacon. It would be nice if there was a little more to the random terrain generation to give Flux and JuiceBox more to talk about, but there's just something weirdly... idyllic about traipsing along to the mellow soundtrack. You'll travel to several different, distinct locations around the planet, and they showcase a lot of really clever (and... gross) alien design. In the Bawg, for example, you can feed tiny wormlike creatures called Bloo to the Jollychomp to make them explode to harvest their resources, but you can also lure other creatures within range before you trigger the explosion to take them out. It makes the world feel like it has its own unique biology, and enlivened by a cast of wonderfully weird weirdos and great writing (make sure to read all the item descriptions and data entries), it's a ton of fun to explore. 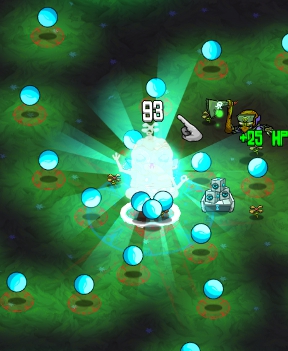 Combat manages to be simple, but challenging. While a lot of the difficulty comes from how powerful most enemies are, the way their range is projected in red on the field makes dodging their attacks a lot more reasonable, and crafting items like various grenades or poisons can make fights a lot easier. Some of the game's most exciting moments are easily during the boss fights, which are so big and elaborate you'll wish there was more of them... especially because otherwise gathering resources can feel like a grind. Everything is useful, which is nice, but because everything is useful, you spend so much of your time simply gathering things in enormous quantities, though harvest bombs can take some of the sting out of it. Still, when an NPC wants you to make them a huge amount of something that requires a particular ingredient that only drops every so often from a specific creature or resource, you can wind up wishing there was a quicker way to do your grocery shopping, or even chests that dropped random pieces of whatever equipment you had unlocked with random stats so you didn't have to always craft, craft, craft the same things until you got something with higher stats yourself.

The game's cross-platform play is easy to use and works very well. You sign up for a free online account with the developers (email, a username, and a password), and sync your saves to the cloud whenever you want to change devices. You will need to buy the game twice, yes, but at $14.99USD for the desktop version and $4.99USD for Android or iOS, it's hardly unreasonable. Playing on both a mobile device (in my case, an iPad Air) and a desktop PC is pretty seamless, though the mobile version's lack of hotkeys means tapping on everything to activate healing or special items can get hairy during combat where it's a little smoother on PC. Whatever platform you play on, however, Crashlands is still one of the most addictive, cheeky, funny action games to come along in a long time. Crashlands has personality, style, and pure energetic joy to burn, making it an easy recommendation for any fan of the genre, on any platform. Let Flux and JuiceBox smash their way into your heart... just... don't leave anything breakable sitting around.

I love this game! I have it on every device I own and the cloud saves sync perfectly.