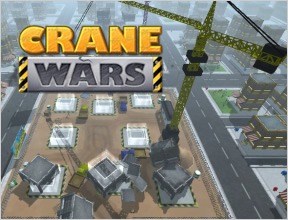 As humans, we face the daily struggle between constructive and destructive behaviors. On the one hand, a functioning society requires us to extend our arms in friendship, maintain civility and build trust. On the other hand, blowing stuff up freaking rules!

This is also the case in Crane Wars, the latest game from Flashbang Studios. You play the role of a crane operator, and your mission is to grab hunks of building and stack them on top of each other. Just move the mouse to target your crane and click and hold to grab an item. Release the mouse button to let go of the item, but be careful, as it will maintain any momentum it has when you release it. It's not necessary to make perfect stacks – the game recognizes any block on top of another one as a single building. However, poorly aligned stacks are more likely to topple over if you try to add to them. After you've gone through a few blocks, gold-colored blocks will begin to appear. These complete any building upon which they are put, earning you lots of points. 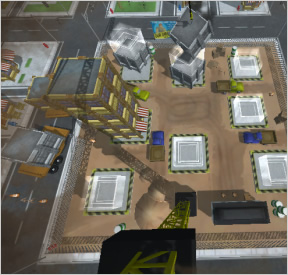 Like any other skilled laborer worth their salt, you're a card-carrying union member, and you cost your financier money whether or not you're working, so you'd better hurry up and stack before the funding runs out! In Crane Wars, time literally equals money! Unfortunately, those lousy, two-bit scabs are working on a site right next door, and they don't much care for union types. If you let them, they'll steal your blocks and even fling cars at your buildings with their own crane! Naturally, the only thing to do is to beat them at their own game. When you're not busy stacking, you can grab a truck, a crate, heck, even a building block and wing it over, raining destruction on those filthy scabs are earning you points to boot! You'll probably find it helpful to switch to a better view of the scabs' site by holding down [space].

As in life, it's best to spend the majority of your time doing constructive activities, for a number of reasons: there's more of a risk to throwing objects, since they are harder to control when thrown, and it eats up more time than simply stacking them; also, throwing too often isn't worth it, since it takes the scabs time to build up something worth destroying. Yet it feels oh, so right to sacrifice a union building block for the greater benefits of seeing a scab skyscraper topple to the ground in a blaze of glory! Doing so even yields a fair amount of points, with more points awarded for taking down larger buildings.

Analysis: Whichever member of the Flashbang team that came up with the idea of a rival construction site deserves a gold star. Seriously. They could have just turned crane wars into a stacking game with their neat top-down control system, and it would have been mildly fun. But just by adding some enemies next door, the game suddenly gained so much more depth. The best part is, there's no one best way to play. You can build and build, and the scabs will leave you more or less at peace. Or you can just go crazy, chucking object with nary a regard for the wanton destruction of property, union or scab. Or find some happy medium that suits your personal preferences. It's just as possible to earn good scores through destruction as it is through construction (although you're more likely to drop a couple stinkbombs with an aggressive assault strategy).

The controls feel extremely natural for a game that you would expect to be pretty fiddly. The X-Y (or, if you want to get technical, r-θ) mouse controls feel smooth, and almost always target the object you want them to. It might take a bit to get used to the lack of Z-control, as the game automatically raises and lowers the crane to avoid smashing into existing stacks, but ultimately it's one less control you need to worry about, which is always a plus for casual gamers. The only thing I found myself wanting was a way to turn those yappy construction workers off, or at least give them a bigger jokebook.

Anyway, check out this well-balanced (snicker!) stacking game, just the latest in what is already an impressive set of games from Flashbang.

Tried to play but I need the Unity Player. When I click on the link, I just get a page that says "not found".

Try this link for the Unity browser plug-in:
http://unity3d.com/unity-web-player-2.x.html

Never mind, found it through the Unity home page.

Thanks Jay, I think I found it as you were posting.

WHen I'm playing crane wars, none of the main page buttons work such as start game or how to play.

I enjoyed almost everything except for the dialogue. If I had to hear "Do you earn a commission for being a JERK?!?!" one more time...

Is there some reason why every time I play 10% of my points get taken away and donated to politicians?

This game sorely needs separate controls for the z-axis. It is an amazing chore to get the crane to lift a piece vertically

unity links still not working for me to DL from.

I had to go to the other 'unity' game 'paper moon' to get the unity download to work. I also don't get the z-axis. Do you have any control over it?

What's with the bizarre political messages?

So this is a 3D Tower Bloxx or something? The controls are terrible. But for some reason I want to keep playing.

It's an okay game- the actual gameplay and controls are a bit fidgety, but the high quality presentation makes this work. Still, my favourite game from FlashBang Studios remains "Minotaur China Shop"! It also features terrible, terrible controls, but is quite conscious about it, and puts them to such hilarious use that the game doesn't suffer at all. I still wait for Minotaur's review to pop up on JIG some day...

It's probably just my laptop or something, but it was really slow and hard to control. And then just as I was putting the third piece of building on to my second tower, my browser completely shut down, so I think I'll leave this one for now.

I hate to say it, but this is the first Blurst game I don't really care for. The controls are just too awkward, and not in that fun clumsy minotaur or tippy velociraptor jeep way. Not being able to control the z axis is just annoying. I would have preferred something like the stuffed animal crane games, where you control the drop time, but not the speed.

And I found the humor attempts just clunky. I've actually been a union member, and think they've done a lot of good in the workplace. But enough people disagree with me on that score to make the "Good Union members versus Evil Scabs" plot line...uncomfortable.

I say, bring back the dinosaurs. Speaking of which, JetPack Brontosaurus deserves a second look since the Alpha version was reviewed some time ago. The controls are much better now, and it's an absolutely beautiful game.

The control scheme is unusual, but for me it makes the game. Once I realized that the height of the hook isn't really "automatic," but that the hook rises just a little higher than the building the mouse hovers over, I was able to move the hook very smoothly, probably much more smoothly than I could if I had raise and lower the hook manually. I also noticed that when throwing objects, I could set the height of the hook by hovering the mouse over a background building of the appropriate height.

I also like the way that, by swinging objects the long way around, you can use the full length of the crane arm to give an object some serious momentum before throwing it. The whole thing feels very physical, as if I were actually controlling a crane. A crane that's allowed to smash things, that is.

Too slow and cumbersome for me.

The crane moves way too slowly and unpredicitbly for me. I can't aim at the other towers correctly...

Are there anyother sites that I can play this on?