Crabitron from Two Lives Left (creator of Cargo-Bot) is a mobile arcade game that lets you live the life of a giant space crab. Using your giant space claws, crush vehicles and fend off space enemies as you turn space stuff into space lunch. There's nothing about those sentences that isn't awesome, and Crabitron goes out of its way to remind you that being a giant space crab is just that. 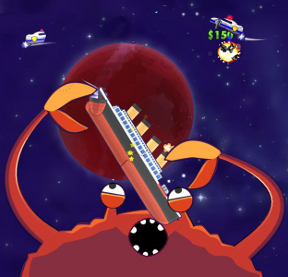 How do you pilot a giant space crab? By manning the claws, of course. Using two fingers from each of your hands, touch either side of both pincers and use them like real crab claws. Yes, we know you've pretended to be a crab before, so don't act like it's not second nature. Now simply grab, squeeze and crush anything that flies by, dumping debris into your mouth for points and using your tough claws to protect your soft arms from harm.

Crabitron is built upon a mission-based structure similar to most mobile arcade games. Venture out in space, crushing and eating things until your wimpy arms eventually fall victim to excessive damage. When the round is over, take your earned coins and head to the CrabLab where you can upgrade your claws, buy burps (yep, that's a thing), or buy bonuses like laser swords or an ambulance to repair damage. Once you're ready to go, head back into space and get to crushin'.

The chief drawback to Crabitron is the learning curve required to get used to the controls. Using four fingers to operate both claws can be a challenge, especially when your arms and hands tend to block big chunks of the screen. More often than not you'll find missiles damage you before you even knew they existed. Stupid non-opaque real life arms. But, as you spend more time with the game this happens less and less frequently. It's just a matter of mastering the fine art of being a giant space crab with claws and a hungry appetite!