Couture Craft, by Resonant Craft, is a game all about taking smaller things and combining them into one bigger, more awesome thing. Weaving threads into cloth. Stitching that cloth into clothing. Taking the match-3 genre and infusing it with the likes of an puzzle game. Here, your playing pieces resemble fashionable accessories, but they don't just vanish into the ether when you get three of them together! Drop them two at a time into the playing field to combine them into newer, better pieces, and you can combine those pieces into even more pieces, and so on and so forth until your wardrobe is a veritable explosion of style. And if that wasn't enough alchemizing for you, you can also mix your socks and hats and whatnots into powerups and goodies between the levels! It's not quite clear how you turn a pair of khaki shorts into a T-shirt, and then morph three of those right back around into denim jeans, but that's the magic of alchemy, isn't it? 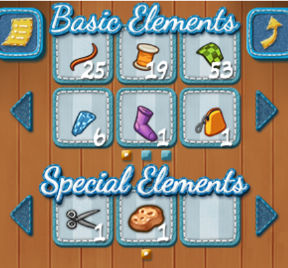 Couture Craft boasts a clever concept bolstered by some lovely production values. The graphics are as adorable as a daisy patch sewn onto a sundress, and the whole thing looks clean as fresh laundry. The combination of genres gives this game a strategy all its own, distinct from both its parents. Because pieces never really vanish, just consolidate, you've got to plan your moves not only around matching pieces, but ensuring the resulting items can be easily combined as well. As you create better and better items in the field, they'll start appearing as dropping pieces, too, though the increased number of items to match can make things dicey. It's such a neat concept that it's almost painful to admit that it does have one large-ish drawback... the grinding. Certain levels require you to use specific items to pass them, such as nuggets that turn clothing gold, silver, and bronze, and they're not cheap to create. Inevitably, you'll need to replay earlier levels to get enough items to make them. Most high-level items can be crafted themselves, but that won't help if you run out of basics like thread. You do earn rewards regardless of whether you pass or fail a level, and you can purchase items that boost the rewards you gain, which help alleviate this. It's such an interesting combination of ideas, however, that makes it worth playing despite its flaws.

I'd much rather see this on a larger scale, like a "clicker" game. Combine stuff to make other stuff, which you then combine together to make even bigger stuff, eventually crafting the WORLD. Sort of this, plus cookie clicker, plus doodle god.

By itself, though, this game doesn't interest me as much.

Level 9: "You must first buy the recipe Silver Nugget."

Try to buy the Silver Nugget recipe: "For now you do not have to buy any other recipe."

Chipmunk, I had the same exact problem as you. Resetting the game fixes the issue, and you're able to buy the silver nugget.

Not knowing what combines to make what makes the early levels guessy. On the get to 300 points level I just pushed down the items until it said I won. Then i quit when it started making me combine things and buy things and cook things. I had no idea why I was doing it and what the purpose was so I quit.

Yeah, I quit too. This game is attempting to be a "clone + features" of games like Faerie Alchemy and Digital Upgrade. If you have figured out how to play those games, then the core idea of this game is identical.

My problem was also with the crafting, but not with the requirement itself. I don't mind grinding previous levels, but I'd like to know the basis upon which I'm awarded reagents. The smartest way to have done this would have been to give us a certain number of threads based on the points we won, then made us craft our way up the chain. This could have been really fun, but it ended up falling flat.

OK, what is up with the purse-like things that won't combine into anything? And the whole recipes/cooking thing is (a) not explained well enough *at* *all*, and (b) needless mixing of metaphors.

The randomly-generated crafting patterns are a nice idea, but they're executed poorly. I purchased the formula for shorts and got: 1 spool + 1 sock + 2 shorts. Not very useful...

There's a bug where if you keep the stack vertical at the top right and then press the up and right keys at the same time, you can force 2 items into 1 square. This can also be cycled used the up key into other weird shapes.

Does anyone else need to refresh the page in order to play the next level? Because I do. :(.