I fashion myself as a game show fanatic. I enjoy watching footage of gameshows past and present, and from here and abroad. So just imagine my giddy delight when a game show news blog announced the arrival of wedigtv.com, and its collection of broadband game show re-creations from England. The crew at WeDigTV spent hours contacting the original shows' hosts for recording sessions and digging up archive footage to bring you games that almost exactly reflect what appears on TV.

Countdown is based on one of the longest running game shows in the world. Currently hosted by Des O'Connor and assisted by Carol Vorderman, this show features two contestants battling it out in a game of letters, numbers, and "the crucial Countdown Conundrum." Each round is played against a giant 30-second clock, while the famous Countdown music plays. (Think "Jeopardy!" theme music.) In this version though, the clock is 45 seconds long, but that's not noticeable enough to deter from gameplay. 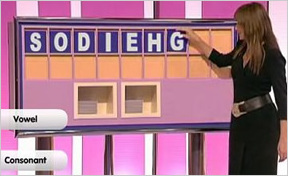 This broadband version lets you play two letters rounds, two numbers rounds, and the final conundrum round. In the letters rounds, you select nine letters, choosing between consonants and vowels. After the letters are presented, the timer starts. Type in or click on the letters to make as many words as you can find. Keep in mind that the goal is not to make more words, but to make the longest word that you can. After time is up, select one word you'd like to submit, and see how many points you'll earn, plus a suggestion for a longer word that could be made. More points are given for a longer word, and that elusive 9-letter word is worth double points. And don't forget British spelling... it's "colour," not "color!"

In the numbers rounds, you select six numbers from a board of 24 tiles. (The top four tiles in the diagram are the "big numbers," 25, 50, 75, and 100. The remaining three rows are two each of the numbers 1-10.) Your goal is to come as close to a randomly-selected number as possible, using the four basic operations (add, subtract, multiply, and divide). When inputting your solution, click the circle to cycle through the possible operations, then choose the two numbers to fill in the blanks. Remember that you do NOT need to use all of the numbers to reach the target. Once, I hit the target number 108 simply by adding 100 and 8.

The final round of play is the conundrum, which is a jumbled-up nine-letter word. Buzz in when you think you know what the unscrambled word is, and quickly input the solution. This round sounds simple, but plays a significant role in a close match-up.

On all of WeDigTV's games, the contestants are represented by pink or blue outlined figures. (You always play as pink.) The footage has been excellently re-edited to fit these colorful people in the game, but at points, the camera is left on them for too long, creating little awkward pauses.

To add to the awkwardness, the game also pauses for commercial breaks... and yes, there are real commercials. (Hey, ya gotta pay the bills somehow.) As of yet, there are only a few companies sponsoring ad time, but the commercials all include an interactive bit to them to keep you interested. Take note though, on rare occasions, the game has been known to "hang" coming into or going out of these commercial breaks, so you may need to restart your game.

Five other interactive game shows are available on WeDigTV, including British versions of "The Price is Right," "Family Feud," and others. If you register with the website, you can have your scores entered into a high scores list, and be eligible for some prizes. (Note: I have not checked on the availability of prizes, so the offers may not be available to American players.)

Important note: These games heavily rely on video footage to present the action. Therefore, a broadband connection is recommended (if not required) to play all of these games.

Update: It appears that the above link for the Countdown link still works, but going to wedigtv's new homepage leads you to a new beta version of the site, combining all of the games in a more TV-like atmosphere, with each game on its own channel. There are still some glitches to work out (such as the game hanging in the middle of play), but these kinks should be worked out eventually. Also, be sure and check out the two newest game shows, "Who Wants to be a Millionaire?" and "Deal or No Deal!"

Yay, Countdown! I've watched it many a time, but I'm never as good at it as the contestants are. Oh well, I'll give this a try. Wish me luck.

R.I.P. Richard Whiteley, who used to present the show.

Isn't that Des Lynam, rather than Des o'Connor?

No Nick, Des O'Connor is now the host, Dez Lynam's gone back to sport.

This is a brilliant find and I look forward to playing it!

UGH. This game is annoying on so many levels.

It has interactive ads that split up the game after each round; you're not told what you need to do when you first start playing (which eats up about 5 seconds of your 45 second timer) unless you've fully read through this review; actual gameplay takes up, at most, 30% of the time spent in the Flash game; it replicates annoying parts of game shows like jingles and stupid banter and audience applause; and to top it all off, only the numbers part of the game is really unique -- the letters part is the usual rearrange jumbled letters to form the longest word possible.

Nope, sorry. This doesn't cut it for me.

Ah! But Joolz, that is Des Lynam. I love Countdown...

even with a T1 connection, this is slower than anything i have ever played. it does look pretty good though.

I couldn't get to the number game in Firefox. No problems in IE.

Funny how I decided to chop some veggies during the "ad breaks." Good to know that my cutting board is cleaner than some of the other things in my home. :)

NOW I know who Dez is! He's parodied in British comedies, but as a Yank, I never knew who he was. hee hee hee...he's funny.

way too much ad! the games are hard but i thing the math thing is buggy..

I'm enjoying The Price Is Right. Who's that host?

The only thing I find wrong with the game is that the numbers round is really buggy - I can never press the number I want, for some reason, and it annoys the heck out of me!

It's not Bob Barker thats for sure ;-) Anyways, the game runs quite well for me (with a T1 and Firefox) but I really could do without the ads.. but they have to get paid somehow!

Very very detailed game, but takes so long - need to fast forward Carol - and the ads! :)

There is a skip button in the bottom right of the screen, by the way.

I liked it well enough, though the ads are REALLY annoying. Especially since I have seen the sames ones repeated. And on my second game, my first numbers round was impossible. Even Carol said so. I guess that's the breaks.

I was finally catching on after the first two rounds, but then the game broke. In the second half, the game was somehow still using the letters from the first half, which meant that my word couldn't be formed; and in the numbers, the tiles were all displayed as "1". Shame; it seemed quite interesting. (Anyone else have this problem?)

You did sometimes get impossible numbers games on the show. And, very rarely, Carol missed an answer that existed.

The Price Is Right host is Joe Pasquale.

There are commercials in the game. Aggravating.

My strategy was to choose 4 vowels and 5 consonants and 2 large numbers and 4 small numbers. I managed 34k on my own and 71k with assistance. Aside from the commercials, I really liked it.

Unlike everyone else, the ads didn't annoy me, I didn't even notice them, I just tuned out or did something else on my computer, like Photoshop stuff, until they were over :)

I had no trouble with this game, or any of the games on the site.

This is brilliant especially if you're British, as these are some of the great game shows from yesteryear (ok some are so bad that they are good). Shame Richard Whiteley isn't around to of done this countdown version.

Yes the ads are annoying but they are like the true tv versions so you feel as if you are really a contestant on the show!

Try the Bullseye game and get to Bully's Prize Board - the prizes are hilarious, and true to the original show!

Man, this game is a killer brain hemorrhoid for anyone that isn't a freaking..British..vocabulary master..mathematician.. thing!

But its really excellent presentation made my want to keep trying, no matter how frustrated I got. It's a rarity to have anything that stops ME from getting frustrated.

The commercials are a real treat for me, especially the animated ones I haven't seen over in America. (studying for a minor in marketing!) So I loves that kind of stuff.

Fun to play, even if my score remains zero throughout the entire game..

Price is Right is buggy whenever i get passed the first price round the next part won't start??? T_T

If you like the numbers game, try Beat Carol. It's a flash version of the game, played with numbers from real games with the answers from both the contenstants and Carol.

that is des lynam not des o conner... enjoying this tho countdown is wickid!

After all the downloading: instant freeze.
Not worth the trouble.