Costume Quest, DoubleFine's aggressively adorable Halloween RPG adventure, has finally hit PCs after a long solo affair with the Playstation Network and XBOX Live Arcade. The story follows you as one of a pair of twins (either a boy or a girl, Reynold and Wren respectively) on Halloween night. Whoever you select to be "in charge" becomes the main character and is delighted to have control over their sibling for a night of trick-or-treating... at least until their twin, dressed as a piece of candy corn, gets mistaken for actual candy by a monster who is in the process of looting a house they visit. It seems you've stumbled into an invasion, as it quickly becomes apparent the town is crawling with monsters intent on gathering all the candy they can for nefarious purposes, and as the "chewiest looking" one, your sibling is a real prize for them. The adults don't believe you, so if you want to rescue your brother (or sister!) you'll have to do the job yourself or you'll be in a lot of trouble when you come home alone. 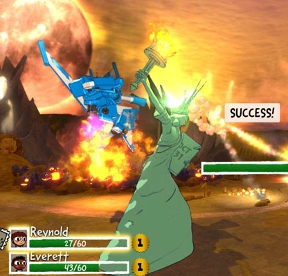 The game plays like your typical turn-based RPG. You'll explore areas (initially only the neighbourhood, but later you'll travel elsewhere too) getting in fights with monsters, and that's where things get a bit weird. Throughout the game you'll find different components that will ultimately unlock new costumes to wear. Why is this important? Well, anytime you enter battle your apple-cheeked youngster literally transforms into the embodiment of the costume they're wearing, complete with special abilities. Battle is your standard turn-based affair, though with the inclusion of some Super Mario RPG-style quick time events; tap the buttons you're shown in order to block attacks or get an extra boost. You'll gain experience, level up (levels are capped at 10, unfortunately), and gain candy to spend, cards to trade, and even engage in some light puzzle-solving. Analysis: Make no mistake, this game is RPG-lite; your three party members all have one-note personalities, the story is resolved almost too simply after a half-hearted stab at some emotional development between the twins, and it's all very linear. Gameplay itself is also fairly straightforward to the point where it can feel somewhat repetitive; there's never any real variation, the battle stamps wind up feeling underdeveloped since they're the only thing you can spend candy on, and it's definitely not going to prove much of a challenge either from a puzzler's perspective or simple battle mechanics. Some of the costumes frankly aren't that useful, and since you can't switch out during battle, you'll probably wind up just sticking with the three you're most comfortable with unless the game forces you into another for plot purposes. (Robot, Unicorn, and French Fries for the win!)

But you know what? Who cares! This game is not intended as a deep, engrossing, complex title; it's fun, light-hearted, silly, and frequently laugh-out-loud funny. Whereas in a lot of modern RPGs I tend to ignore NPCs that aren't directly related to the plot since they rarely have anything useful or interesting to say, in Costume Quest I tracked down every single person I could and chatted with them. (And then hit them with my candy bag.) Almost everyone has something weird and funny to say whether the game forces you to talk to them or not. While a lot of the humour will probably go right over some of the younger kids' heads (such as a boy in a banana costume complaining that last year as a total "banana-fest") it's less of a kids-only/adults-only thing and really seems to be embracing that E for Everyone rating. Kids will laugh at the straight-forward humour, and adults will find that there's a lot of gags for themselves to appreciate as well, a lot like old Bugs Bunny cartoons. 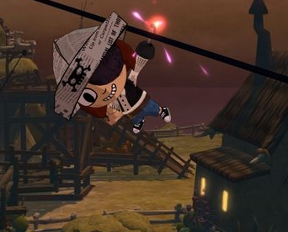 The visuals here are simple, drawn by Tasha of Tasha's Game, but a joy to behold simply because of how bright, creative, and colourful they are. Character designs, both in and out of battle, are absolutely brilliant; I didn't realise my life was incomplete until I'd seen the Statue of Liberty's Anthem special ability, or turned into a maniacal, sentient, crab-walking box of french fries. This is easily the type of game you can play with a big, goofy grin on your face the whole time. Exploring the different environments is just wonderful, and they're all full of a lot of little details that make them stand out. It doesn't do a lot to innovate, but at entertaining you it succeeds with flying stars. It's extremely easy to pick up and play, at any age (kids will have no trouble mastering battle mechanics), and once you do, you'll want to play it all the way through.

While players 10 or younger will probably love it the most, there's enough to like about Costume Quest that I can honestly recommend it to anyone looking for lighter fare and with a sense of humour. Heck, my husband and I don't have ankle-biters and we played it all together in one sitting start to finish, laughing at everything and cheering at the overly-dramatic transformations and special attacks. Even though the whole thing only runs about six hours, not including the Grubbins on Ice DLC included free with the PC version, this is still an adventure game that's easily worth the cost of admission. Put quite simply, Costume Quest is a fun, rambunctious, and effortlessly enjoyable title that you really shouldn't miss. Taken as it is, it's pure fun for all ages, and comes highly recommended.

ooh a PC version of a lovable console game :3

id like to know if theres any difference between the PC version and the PS3/XBox versions that anyone has noticed?

i have Costume Quest and the Grubbins on Ice DLC on the PS3, so as much as i love this game, id like to know ahead of time before buying the same game twice :P

otherwise though, this is a great game and i personally recommend it for kids of all ages (i think adults are just kids hiding in business suits) :3