City planners don't have it easy. Making a functioning place for people to live and work, be it bustling metropolis or cozy hillside tourist trap, takes a lot of care and strategy, so when you get called in to fix the mess the local mayor has made in the indie card-based puzzle game Concrete Jungle by Cole Powered Games, you know you have your work cut out for you. The city is, put bluntly, a mess, but what can you expect from a place designed by a guy who thinks a school surrounded by prisons is a good idea? Thankfully, you've got brainy Laney Thompson on your side, and despite the dunce of a mayor and a money-grubbing would-be land owner or three, she's got a plan to get the place back on track. Unlock and play cards in each level with their own positive and negative effects on tiles around them, carefully planning out your available land to meet your goal before you run out of space... or someone gets to it before you do! Though deceptively easy to initially pick up, Concrete Jungle is definitely hard to master, and even harder to walk away from. Featuring clever, strategic mechanics, a fantastic tongue-in-cheek cartoon style and characters, and smart gameplay, Concrete Jungle is an easily recommended game of cards and construction for just about anyone that's addictive and clever in equal measure. 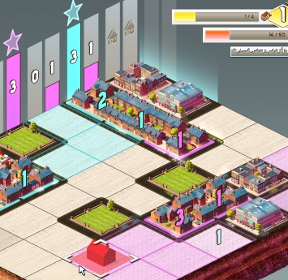 The basic gist of the gameplay is this... make the numbers in each column reach your target to clear that column, and proceed one by one until you reach the finish line of each stage. To do this, you play different buildings in the form of cards from your deck. Some structures, like houses, collect points towards your column total, while others bestow them within a certain configuration of nearby squares, or otherwise provide passive bonuses. The trick is that some structures also bestow squares with negative point costs, so you have to think carefully about what you're putting down, and where, in order to meet each column's requirement without running out of space. If you do run out of space before you meet your goal, you can spend a heart to remove the column, but spend too many, and it's game over.

There's more to it, of course, and the game's extensive tutorial will walk you through the finer points of things like block type bonuses, which groups specific types of buildings like residential or commercial, as well as, of course, deck building to ensure you have a decent variety of cards to face whatever is ahead of you. Then there are the ways you can win extra cards to use each stage, and the way playing certain cards can potentially bump up future column requirements if you play too many of them. You'll even be able to take different characters into levels with you to use their upgrade trees for different bonuses. While you'll initially be able to build however you please, different gameplay modes, such as when you have another character actively building against you for control of a column, means you'll need to make every move and card count. Versus mode is even trickier, as you and an opponent build within limited space in the same column to try to win it for yourself. 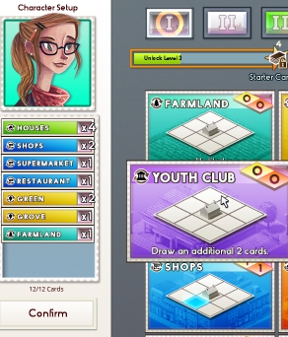 If it sounds like a lot to take in at once, don't worry. By playing the campaign, Concrete Jungle gradually eases you into its concepts bit by bit like the world's most comfortable bath, and while it does get very challenging, the difficulty curve is almost perfect. Once you start unlocking different cards to pre-build your deck with or pick up during levels, you need to be thinking and planning several moves ahead on the more difficult levels, while the various game modes keep you thinking on your toes. It's a shame it isn't a mobile title, since while it may be a snug fit for smaller screens, Concrete Jungle is definitely the sort of game I could see myself compulsively pulling out to play a few rounds of whenever I thought I could sneak them in. It doesn't hurt that apart from a few minor typos, the dialogue is often extremely funny, and the characters are pretty darn likable too, which means the whole thing is ensconced in one very lovely package.

If you love strategic puzzle games, then Concrete Jungle is a no-brainer recommendation. It's the sort of game you can sit and play for hours, and still want to come back later for more. Concrete Jungle is challenging and clever in all the right ways, and an addition to the puzzle genre that stands head and shoulders above many others with pride.