No matter how much we like to deny it and enjoy rolling our eyes with jaded disdain whenever they're around doing what they do, all of us were teenagers once. Chances are, for you, that was a weird time. At once both simple and very complicated, it's a time when you're expected to balance homework and chores (and maybe a part time job) with figuring out the person you're going to be (and how to get there), while just getting by day to day can feel like swimming upstream. The team behind the upcoming episodic indie adventure game Long Story know what it's like, and they're out to create a game that realistically captures both the good and the bad and everything in between. 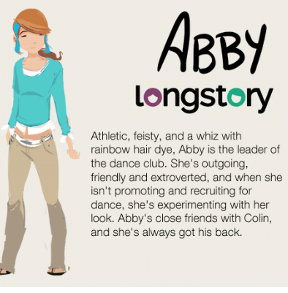 As a young woman returning home after a year in France, you come back to school only to discover that the previous owner of your new locker disappeared under mysterious circumstances. Of course, uncovering the truth might have to take a backseat to social anxiety, dating, bullying, even sexual identity, and more. Despite unfortunately only offering a visually unchangeable female protagonist, Long Story promises to offer five love interests, two of which are female (and one they're being coy about), which is a refreshing change. It's also a relief to see male romantic interests that represent more than the typical "hot while male" usually featured in these types of games... Marcel, for instance, has just immigrated from Dubai and is struggling to readjust but potentially alienating everyone in the process, while rugby playing and huskily-built Colin is also an affable YouTube gaming sensation. It shows a real effort to represent what could be real people instead of idealised stereotypes, a rare move when it comes to dating games.

Long Story represents an effort by its team to create a game and a world people can relate to, with events that have actually happened to them, and even going so far as to do things like actually speak with people who have gone through international immigration to make sure Marcel is a character who rings true. It's impressive to see developers so determined to create a game of this type that doesn't fall back on simple tropes and over-the-top drama. (And hopefully someone, somewhere, is making something similar for guys, as well as people who might not identify as either gender!) Though greater details are scarce, there's a Kickstarter on the way, and you can hit up the official website for in-depth character profiles and an extensive developer blog to learn more.