Coming Soon: Crypt of the NecroDancer

There are no words for how badly I want to play the upcoming roguelike/rhythm game Crypt of the NecroDancer, and if the soul of a funky fresh dancer lives within you, or if you just refuse to admit your random thrashing looks nothing like dancing, then chances are you'll feel the same. From Brace Yourself Games comes a tale of a gutsy young woman whose beating heart is stolen when she accidentally falls into the tomb of an ancient wizard and awakens him. Now, she ventures forth into the (procedurally generated) crypt to recover it, facing off against dragons, zombies, skeletons and much more, gathering weapons and upgrades... through the magic of dance! 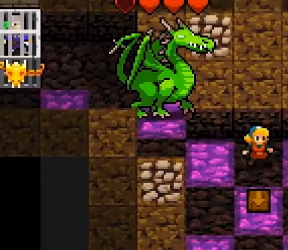 See, Crypt of the NecroDancer's gimmick is that you can play it with either your keyboard or a dance pad, turning the turn-based classic roguelike gameplay into a test of strategy, timing, and of course, rhythm. Rather than being able to hem and haw until you choose the perfect mode of attack for any situation, you'll be forced to act within a certain amount of time. Each beat of the music is a turn, and nailing the music allows you to rack up multipliers. Typically, time limits, even musical ones, are the sort of thing that tends to make a lot of players begin the Hedging Noise Symphony, but Crypt of the NecroDancer promises to be accessible to players of any skill level rather than the typical punishing difficulty usually associated with roguelikes. Throw in the ability to use your own Dance Dance Revolution pad and MP3s if you like and I'm sold. Yes, I'm going to be slaying monsters to Don't Stop Believin' and Smile, Smile, Smile... and I'm not sorry..

It doesn't hurt that the game looks gorgeous as well, with a colourful pixel style, and the game's own soundtrack is downright awesome enough that you might not find yourself immediately reaching for those MP3s off the bat. Interestingly, the developers are "developing the game publicly", so you can follow along in the forums instead of just peering in their windows under the cover of night like usual. Crypt of the NecroDancer will hit Steam in Early Access sometime later this year, and you can pre-order the game for $13.99USD (a 10% discount) to help it along. Check out the official website for trailers, screenshots, and even more information!

Hello, while a lot of people probably like this new kind of review, me I have to say that the main reason why I check jayisgames only, instead of indiegames.com for example, is because you do not post dozen of teasers of some games until they are released.

Hi zzzzz. :) I understand that you aren't interested in these previews, but they're something we've wanted to do for a while and people have asked for. I don't think two articles in three days is a lot, personally, and I have always been careful and clear in descriptions that show up in the RSS feed to mark these ("Coming later this year", for instance) as non-reviews, and the appropriate tags display as well which should allow you to know to ignore them.

Thanks for replying that quickly, I will do with that.

Oooh, I remember hearing about this game! I'm still on the fence about whether to get it or not, although the option of using my dance mat is so very tempting. I might wait until a few LPers give it a once-over.

On an unrelated note, I have now decided that Dora and I are possible alternate reality twins, due to our similar tastes in humor/music, but more than likely different upbringings and such. :P

Personally I'm glad to finally see more indie games being talked about here. I'm not really a big gamer but recently have been looking for more info about things that aren't flash games or Big Fish offerings. A lot of my recent game purchases have been things I've discovered via Humble Bundles/similar or browsing for indie games elsewhere. Jayisgames is my daily reading, and I'm happy that I won't have to hunt around to find out about other games - keeping my RSS feeds cleaner and ensuring my time is better spent playing and not researching.