Columbus: Ghost of the
Mystery Stone

We all know that, "In 1492, Columbus sailed the ocean blue," after which he discovered, or more accurately rediscovered, the Americas. In fact, some folks in the United States are enjoying a three day weekend commemorating this event right now. But did you know that Columbus' most amazing escapade never actually made it into the history books? That's right, but thanks to Vogat Interactive's new hidden object game, Columbus: Ghost of the Mystery Stone, centuries of historical omission have finally come to an end. 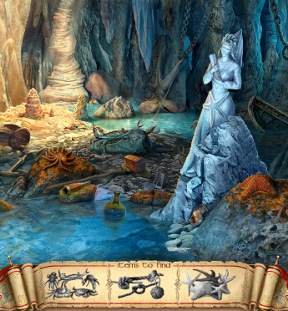 Before the famed explorer ever reached the shores of the New World, his search for new trade routes for the Queen thrust him into the midst of a devilish maelstrom. The wind and sea battered his beloved Pinta before crashing it against the rocks of some unknown land and pitching Columbus headlong into the deep. There he would've no doubt perished had he not been saved by a mysterious phantom of the sea. Though his new lease on life was undoubtedly welcome, Columbus soon found that his resurrection came with a price. Now wrapped up in the same curse that had trapped his spectral savior, Columbus must somehow find his way off this mysterious island, resurrect the cursed phantom, and ultimately save himself from sharing her fate.

Assisting Columbus escape his curse will be no small task. Ahead of you lie tons of hidden object scenes to put your observational skills to the test. Most of these will be the standard list style item hunt, but frequently enough you'll be treated to scenes where you will search for parts of larger items as seen in games like Flux Family Secrets. There's a little bit of an adventure influence at work as well as each hidden object scene will yield an item that can then be used to elsewhere to progress. Meanwhile the action is broken up here and there with a broad range of mini-games and puzzles. Succeed, and Columbus may survive to discover a new continent. Fail, and, well, I'm sure someone will eventually get around to stumbling across the Americas sooner or later. 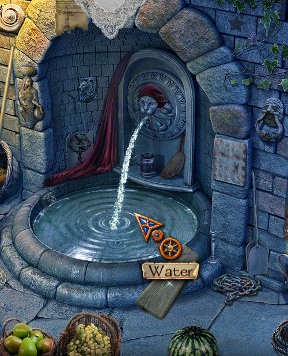 Analysis: Beyond enjoying an extra day off, I don't often actually celebrate Columbus Day, but it's kind of nice to know I can commemorate the discovery of my half of the globe by Europeans with this juicy little object finder. While lacking in some areas, Ghost of the Mystery Stone does a fine job with delivering on the meat and potatoes aspect of gaming that twitches the fun nerve of hidden object fans everywhere.

The clearest strength this Columbus adventure boasts is in fact its item searching gameplay. There are tons of hidden object scenes to scrutinize here, and they're all actually quite challenging. Even better, this game manages to be challenging without resorting too often to common cheats such as the overuse of long thin objects, or burying really small objects in crowded backgrounds. The relatively high challenge is also pleasantly mitigated by a generous hint system, no punishments for excessive clicking, and some absolutely gorgeous illustrations. Some of the scenes you come across might be on the bland side, but most are clean, eye-catching, and beautiful.

Unfortunately, once you leave the realm of object finding, this Columbus adventure starts to fall off. There are one or two truly clever and original mini-games, but a vast majority of them are rehashes of mini-games we have seen time and again in hidden object games. Also, the adventure aspect here isn't terrible, but it's far from challenging and can feel maybe a bit tacked on. All of this is encased in story telling that is disappointingly mediocre. As lovely as the individual scenes are, the character art is rather plain, and they are forced to tell a less than inspired story with drab lines. In the end everything outside the object finding feels like nothing more than filler to keep you marginally occupied from one scene to the next.

But if you love straight hidden object action, Ghost of the Mystery Stone delivers. This one boasts a nice challenge, beautiful scenery, and the Leif Ericson prequel practically writes itself.

Darn right he rediscovered it. There are legends of those who speak of a large continent in the far west beyond the sea(e.g. Pliny).:)

Actually, it's us Canadians that are celebrating Thanksgiving this weekend. Our neighbours to the South celebrate it on the fourth Thursday in November...just letting you know :))

Is anyone else having trouble getting this to run? It seems to be running when I look at the open processes, but its not coming up and I can't switch to it. Hmm.

I just saw the on the Big Fish forums that there are lot of people having trouble. Most seem to have problems with a Win 7/ 64 bit system. The people at Big Fish have said a couple of times already that they are aware of the issue and are working on a fix.