In Nitrome's platformer Colour Blind, you play one half of a pair of sentient, walking eyeballs. Ain't even kidding. When your other half gets abducted by a grungy cloud with a serious case of stink-eye, you set out to rescue her across a grey world filled with danger. Lucky for you, a little colour can change the way you see reality! Use the [WASD] or [arrow] keys to move, and [spacebar] to jump. Jump through paintbrushes to allow yourself to see with whatever colour they contain, also enabling you to interact with objects of that colour like platforms, crates, tokens, and more. Take a dousing from water and you'll wash away all the colours you've got, but since some things that may block your way or hazards like spikes and enemies are also tied to certain colours, washing the slate clean isn't always a bad thing. Just avoid taking damage, since you'll be sent back to the last checkpoint you touched! 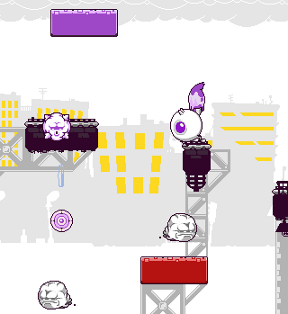 As cute as it looks, Colour Blind can be seriously challenging at times. While there are some puzzle aspects, in most cases it's your reflexes that are being tested, with precise platforming and timing being a factor. The difficulty ramps up noticeably after the first batch of levels, and the one-hit KO can bring you to your knees. It's not necessarily something you'd expect given the game's bouncy soundtrack and cutesy-poo style, and if I'd had any tables in my immediate vicinity while failing over and over at certain points, I would have flipped them most soundly indeed.

Of course, being unexpectedly difficult doesn't make a game bad, and Colour Blind definitely is not bad. Demanding, sure, but hardly bad. Levels are deviously designed, and the game's colour swapping mechanic gets used in some interesting ways that will test your skill. It does seem like the placement of checkpoints is a bit uneven, with some stages throwing them at your feet and others miserly hoarding them, which means having to redo an entire sequence of meticulously timed areas you barely skirted through by the skin of your teeth because you were off by a split second in hopping over a single spike could lead to some ragequits. But if you're up for a challenge, and a good looking one at that, give Colour Blind a try. Just don't be surprised if it has you seeing red.

The checkpoints do not save the player's state properly, which means that if I am painted a certain color when I hit a checkpoint and then I die, I revive without that color. This breaks certain parts of the game, making backtracking necessary when it shouldn't be. It's also a bit of a cheat, allowing the player to get coins after a checkpoint but before dying, and return to the checkpoint still having the coins.

At this rate, JiG may need a walking eyeball tag.

Does anyone know if the awesome glasses do anything in particular?

There. It took countless tries, & I almost ragequit or asked if evil cloud guy could use another eyeball to go with the one he eyenapped, but I beat the end boss.

If the checkpoints saved your colors, this would be great. As it is, it involves too many full-level restarts because of one missed coin for me to find it fun.

The animation is so good, the gameplay feels smooth and original, the concept is brilliant, the music layers as we gain colors, what a nice game.

Sometimes I feel like I want more from Nitrome. I mean, short browser games are great but they can certainly do more than that, their unpretentious games are better than so many things being sold commercially. I'm looking forward to the flightless that's just been greenlit on steam.

@xindaris, The checkpoints are designed in the intended way. The colours are supposed to be deleted upon death. It would break the levels if it saved the colour you last had.
Also we wanted to give the player a way to grind the coins through checkpoints. We had many complains in our Hot Air Jr game about not allowing players to grind the stars. And we feel that it is hard enough, even with this grind feature intact.

@Zanoushe, The levels would not work if the colours were saved at checkpoints. And also the coins are just for completionist's and are not a requirement to get to the next level.

@ Diego, Flightless is still sitting on Greenlight (its currently at about spot #70ish I think. And is not really budging for the moment. Hopefully we can get it Greenlit at some point.
Also we are branching out into the iOS market. Our first game Icebreaker a Viking Voyage is in my humble opinion looking great. It should be out really soon.

How many coins do you need for the glasses?

@Jonathan Annal: I just posted at a discussion topic on the steam channel about that. It didn't even cross my mind this was going to take long to get greenlight. But, well, I'm sure it will come around.

I am pretty frustrated with the boss level, to say the least. I feel like you have to have a perfect timing with the green and purple stage to defeat him. I've tried so many times and always end up a moment too late, it's quite unpleasant after having tried hard to get through the whole game.

Could've used some more play-testing. The difficulty curve was uneven with a notable spike at the later levels. Also, the levels relied too much on requiring the player to do a bunch of fairly easy things in a row without any mistakes as a way to increase the difficulty. This, in my opinion, is poor design.

After much tedium, I got all the coins and obtained the awesome glasses. I played through the bonus level once but had absolutely no motivation to try for the timed ending.

Controls were reasonably tight but movement felt sluggish. The art style was polished as always with Nitrome, but felt somewhat derivative. The overall effect was "generic quirky". Also, given the number of times the player is likely to die (especially when trying for the coins), the slow death animations and blink transition were probably a bad choice.

All in all, not Nitrome's best.

Well, I found the game to be really solid. The difficulty factor may have ramped up more than I was expecting, but not so much that I ever felt like giving up totally. Overcoming the challenges left me feeling quite satisfied. Colour Blind was clearly the product of a very experienced game developer(s).

Much love! I welcome a Colour Blind 2.