Bugs and I don't get on well. Just last night I was trying to gently trap a spider in a cup so I could release it non-violently into the great outdoors where it could hopefully continue the circle of life by getting its freaky carapace eaten by a bird, and it chose to launch itself at my face. Death before dishonor, I guess. My point is, bugs are not to be trusted, and giant swarms of killer space bugs even less so. In QiGames' tower defense Colony Defenders 2: Swarm Resistance, that's exactly what you're dealing with as you plop down machine guns, rocket launchers, and more to deal with a nasty swarm of alien behemoths who really seem to disapprove of your presence. In each stage, you'll build towers on green bases to protect your command base from the monsters that come in waves. Different critters have different strengths and abilities, but also different weaknesses, so heat-powered rocket launchers can make up for their slow rate of fire, for example, by taking down the huge groups of enemies that are weak against them. (Realistically speaking, what isn't "weak" against a rocket to the face?) 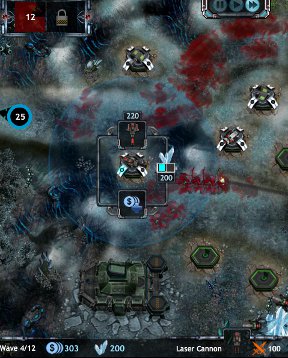 You'll earn cash from fallen enemies you can spend on more towers, or on upgrading the ones you have, and valuable ore, gathered by drones, to improve a tower's rate of fire. You can also periodically use a special ability to help the carnage along, such as a rain of missiles, but since these come with a cool down timer, you may want to save them for when you're really in the thick of it. If an alien reaches your base alive, you'll see the base take damage, and while initially it may seem like it has a lot of hit points, you'll quickly discover that waves can be full of literally dozens of baddies, and it doesn't take long for all that damage to add up. As a result, careful tower placement, as well as tower type, makes an enormous difference in a stage's overall challenge. If you survive, you'll be granted stars based on your performance that you can spend on permanent upgrades to your abilities and weapons.

You don't have a particularly huge variety of upgrades, mind. Colony Defenders 2 only has a handful of towers and a few upgrades for each, most centering around boosting damage. Seen from a distance, it looks like a very Cursed Treasure-esque approach, keeping its game centered around a few simple yet balanced towers instead of overwhelming you with lackluster options. At the same time, however, where Cursed Treasure piled on a wealth of various status effect chances and such to add on to keep you fresh and excited in spending your points, Colony Defenders 2 winds up feeling a little one note. The game is difficult, but it also tends to rely on simply huge numbers for that difficulty most of the time, though upgraded rockets often wind up being the way to go. The game's high quality visuals and artwork look fantastic, but the inability to change the quality settings means players with older computers may find this one lags too much when there's more than a few enemies onscreen. All of this makes Colony Defenders 2: Swarm Resistance an extremely impressive, challenging game with a lot to offer, even if it isn't quite as fleshed out as some of the true titans of the genre.