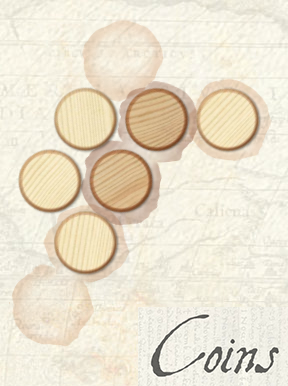 Dim the lights. Light a candle, something scented with ylang-ylang or jasmine. Take that tiny rake and drag it through the mini Zen garden on your knick-knack shelf. Arrange for your cat to bump the wind chimes. Then click on over to Coins, a simple and relaxing puzzle game from Monosynth Games. Slide coins around from their initial position to a goal position in forty soothingly beige levels.

Click on a coin and click where you'd like to place it. Sounds easy, right? Well, of course there's a catch. In the first twenty levels, you can only move a coin to a place where it's touching two other coins. In the second twenty, it must be touching two coins of different colors. In the twenty bonus levels on the iOS version, the coin itself changes color when it moves. As you would expect, the fewer moves you take, the higher your personal awesomeness meter.

Mellow string strumming, parchment and watermark backgrounds, and coins that look like they've been carved from wood soothe your senses while your brain cells enjoy a gentle massage. Getting the highest score (which, rather than the typical star, grants you some kind of abstract box drawing) can be rather difficult in some levels, but the passing margin is rather generous, so you'll never get stuck on a level and unable to move on to the next. This cuts down on frustration considerably while still providing a goal for us perfectionistic types.

The iOS bonus levels provide a little more of a challenge in that it's possible to get stuck and need to restart via the button in the upper right, since you can end up with no possible legal moves if you color change in the wrong way. In general, however, either version is a game that's going to relieve your stress, not add to it, and most of us could use that now and then.

Drag the free coin to the shaded spot.

Drag the top coin to the shaded spot.

Drag each of the free coins to a shaded spot.

Drag one of the free coins to the middle shaded spot. Drag each of the two remaining coins to the other spots.

Drag the lower right coin to either shaded spot. Drag the other free coin to the remaining spot.

Drag one of the bottom coins to the upper right shaded spot. Drag each of the remaining coins to a spot.

I have to admit, I don't quite get the rules when colors are involved..

I agree with Diego. It's either inconsistent or there's a bug.

In the third set, number three is solved this way:

Given that, I cannot solve number 5. It won't take any solution I offer. This

isn't accepted. At first I thought it might be because you can solve it in four moves instead of the "best" score of five, but that's not it, either. I can't figure out any answer that will be accepted, in fact.

On the two color levels, the solution is only accepted if you have dark coins on dark watermarks, and light on light. In the solution you posted for no. 5, argyblarg, the bottom-most light and the topmost dark need to be switched.

Note that you can MOVE light on dark and vice versa (and will need to in intermediate stages) but that it just doesn't count as "solved."

I enjoyed this a lot. Great game!

Ahh...I see now. I must have missed that part of the instructions.

And to think, I solved the first four without knowing the rules....

Stumped on the very last puzzle! Can anyone get this one in 7 moves?

Thanks ore and Xindaris! The coloured targets seemed to be a point of confusion for a lot of people, I'll for sure reconsider the way I do instructions for future games.

Matchu, Nice puzzling skills! :D Glad you made it through.

Walkthrough (in images) for the first half of part IV...

(I figured part IV was the hardest and most needed a walkthrough, but it took way longer than I expected. I may do the rest later).

Watch out: they show all steps and although it may be possible to shrink your browser window, quickly zoom in, and then try to see only a step or two at a time, you may accidentally see more than you wanted.

If someone else wants to take my images and separate them into a multi-step image walkthrough, that's cool with me.

i am having trouble on level 2 part 10. i keep moving the coins around but i cant figure out how to do it with in the limit

the coin not on a circle is moved LAST.

the first two coins to move are already on a circle. they are also diagonal from each other. first coin goes at the very top.

I have every level except 37. Can somebody help me out please?

The far left and far right spaces are the most difficult - make sure you do those before the ones next to them.

For myself I'm stuck on 3-4 under the limit. Any tips?

stucked on 3-6, can do in 6 steps but not in 5. Any hints? or maybe the firsts steps, tks in advance

no need to touch coins that already placed in circles. First you need to move two blacks, then two whites, then two blacks again. Two whites must go under the bottom black, and one of the whites will go to the circle.

Can anyone give hints for 4-8?

did all except 4.8. would be good if you can send an ace solution for it. (aced most of others with helps here though :D)

I'm absolutely stuck on how to ace 2-8. Any hints?

Sorry I don't know how to post screenshots, but it's that easy.

I hope that helped anyone who was stuck there. I was frustrated on it for a good while last night and just figured it out coming back today.

Nevermind, figured it out by pure guess. All the levels are aced now.

really need help with 2-9 acing it. the hint didnt help anything -_-

Got every one except 3-6. Anyone want to help?

NOTE: Free coins mean coins that are not in a correct position.

I hope these directions were clear enough.

Coins start at 1 and the last spot to the right is 6. Positions are labeled the same.

Hope these directions were clear enough to help.

Someone can help with 4-10? Its killing me from two days now!

The remainder of the levels is to come shortly!

What a wonderful game!

Drag the free coin to the shaded spot.

Drag the top coin to the shaded spot.

Drag each of the free coins to a shaded spot.

Drag one of the free coins to the middle shaded spot. Drag each of the two remaining coins to the other spots.

Drag the lower right coin to either shaded spot. Drag the other free coin to the remaining spot.

Drag one of the bottom coins to the upper right shaded spot. Drag each of the remaining coins to a spot.

Two corrections to the walkthrough.

Using the image provided in the walkthrough:

There's no position 12 in the image, and position 10 is already taken up by a coin.

Thank you XtinaS! Guess I should've tested better :) I'm getting the walkthrough updated.