From the beginning of time man has been obsessed with collecting small objects and using them to fight to gain more of them. In not so ancient times marbles were the cat's pajamas, then the dope pogs, to, uh what ever those kids think are "hip" today. Pokemon? ....Bayblades? ...er... My Little Ponies? The point is we as a people enjoy gathering up things, and then risking them all to fight someone else in order to gain more. That's the name of the game in Coin Crypt, a indie rogue-like roleplaying game brought to us by Dumb and Fat Games. (I promise that's their name, I'm not being mean.) Finding a mysterious island you set out to explore, whereupon you find peculiar coins and discover you're a Lootmaster and can bring out the power of the coins. Apparently being a Lootmatster isn't that rare as the island is full of others using the coins and they want yours. Collect, battle, and risk it all to unlock new heroes, please the coin Gods, and become the master of the island. 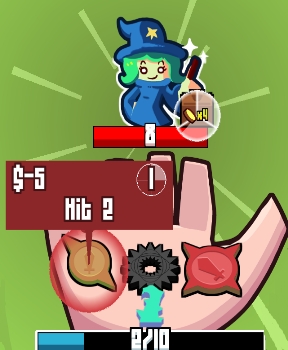 When you show up on the island you only have a small bag of coins. You gain more by finding chests, where in a spirit of unknown origins or reasons, they let you select a number of coins they offer. Each coin has a power, though they usually fit into four categories, attack, buff, shield and heal. There are a few that are only there for the money value but those are just as important. Not only are the coins your way to fight, and a certain kind of health bar, but they are also what you use to shop with. You spend the coins to gain items that help you gain more coins or be stronger in battle. Though it is hard at first, it becomes quite obvious that you must spend coins to gain coins. Even in battle you lose every coin you use, but if you end your opponent quick enough you gain every coin they didn't lose. It becomes a delicate balance of spending the right ones to get back even more. Strategy is a large part of this game. So is risk.

The battle system can first look a bit intimidating, but you'll soon get it under your belt. In the basic system with the basic hero, you draw three coins at a time and can only select one to use before drawing three more. If there are duplicates of a coin, they stack and you can use both of them at the same time. You can also redraw your hand, putting the original three back in your bag and trying again to get something you can work with. But this takes a great deal of your time and with battles not being turn-based wasting time can be a large mistake. Battles end one of two ways... deplete the health bar or drain the coin bag. There are coins to help with each of these strategies. You can get stuck, however, if you run out of attack coins. Things can go south pretty quick if all you have left is defensive moves, and you'll need to find a chest quick. While avoiding battles is rather difficult in most levels (the enemies are quite quick on their feet and each area can be rather small) you do have the option to flee, but this can only be used so many times before the option vanishes. 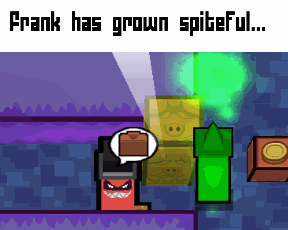 There are a great many secrets on this strange island, hidden rooms, ghosts of the past, and bizarre shrines to odd gods. The rooms usually hold very giving chests, the ghosts gives you a power of your choice, though a weakness comes with it. And the gods... well the gods can either be a blessing or a curse depending on how many coins you have to spare. Going up to one of the totems of a god you can chose to donate a few of your coins. Doing so will bless chests in the future, to hold more coins or let you take more of them. A good investment, especially since if you ignore one of the gods they get a bit bitter and end up blessing your opponents, usually just as you run up to engage them in battle. It can be pretty tricky as if you haven't run into a totem of a particular god for a while, they don't find this as a worthy excuse and curse you anyway. Speaking of vengeful supernaturals, there are other spirits on the island. If you don't leave an area soon enough greedy spirits awake and they begin to steal coins from your bag. You'll have to make a mad dash to the bridge to the next area if you want to survive. But once you leave an area you can't go back. That is, until you die and start over.

Being a rogue-like game, you don't continue where you left off once you're kaput. But starting over isn't the end of the world. In fact, you may find yourself wanting to die as when you do, you can spend your points to unlock new heroes. Each one has a weakness and a strength and they really change up your gameplay and strategies. Also by discovering coins further into the game, they can then appear in the earlier stages. The maps are random, and though most of the monsters stay the same, one run through will be a much different experience than the one before it or the one after it. Unlocking achievements (there are over fifty) you unlock new items, new monsters and bosses, and even new coins. You build the game as you die so instead of stressful defeat you'll only feel a drive to start again. 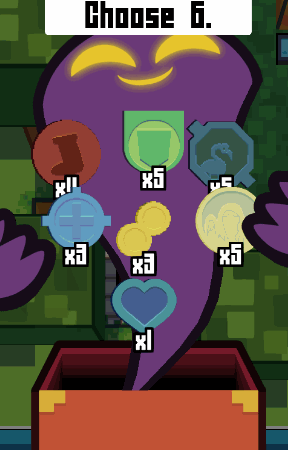 There are a plethora of coins in this game and many different ways to plan out your fighting/surviving tactics. But you'll need to keep your bag organized. If you have too many coins you don't want to use, they'll gum you all up in the quick time battles. But you'll need coins to spend on the deities, in the shops and even the wishing wells, which heals you for 'x' amount of money. Though you have to take every coin from your fallen adversary, you don't have to take all of them from the ghosts in the chests and can walk away from the treasure boxes at any time. Not sure why anyone would that would just let those precious coins go to waste. My precious coins, all mine... oh uh. I mean, you'll still want to get as many coins as you can. That seems to be everyone's drive as if everyone is suddenly addicted to the flat metal discs. So says the story where your hero finds themselves desiring more and more coins and they don't even know why. It's a rather dark plot if you really think about it, but even though the trailer makes the game sound quite serious, it really isn't. The colors are bright, the characters have a great sense of humor drawn into them, (like the grandmother you fight as well as the monkey hero you can unlock) and your little blocky character bops around the screen to cheery music. But I guarantee you'll find the same pull as the nameless explorer does. With days and days of gameplay you're going to find you don't want to stop. And that you won't really have a problem with that.

Well, this is just great. I'm watching yessikziiiq's LP and this seems like the best thing that's appeared on jayis in a long time.

This was one of the most enjoyable games I have played in a long time. Not saying the others were bad, but this one I can see myself playing for months to come. Just gotta get through the cavern! D

"raitng-g" in the tags is mispelt.