Two person away missions are just never a good idea. If there aren't at least three of you, who's going to be the red-shirt? Four is even better, because then you never have to explore that creepy inexplicably closed down science lab by yourself, even if splitting up is the better option. Plus it ups your odds of not dying by...well I don't know how much, but a lot. No such luck for you, though. You've been separated from your teammate Sam on a distant planet as you were investigating an AI facility that has gone dark. You're there to find out what has happened to the scientists inside, but as the game begins you've lost your visual and audio connection to Sam. You can still hear and see her, but can only communicate with her via text in Code 7, a sci-fi themed text adventure by Retragames. 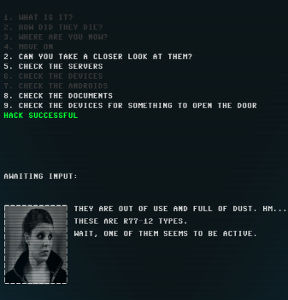 Read the narrative, then choose one of the numerical options on your keyboard to continue. You are able to directly respond to Sam, but since you are also tapped into the computer system, you are able to perform some hacking. Watch for key words in the dialog and try typing them in to see if some sort of hack is available hat will help your partner navigate the facility and reunite with you. There are checkpoints at various points in the game, so if you make a fatal error you start over from the latest area you entered and not the beginning of the story. It also lets you skip ahead through dialog you've already heard. This is nice as it lets you explore different options without fear of mistakes. Code 7 does a wonderful job creating a creepy atmosphere as you progress. Between the intense soundtrack and the flickering screen (complete with subliminal messages, if you can catch them), you're never sure what might be around the next corner...or of your survival.

Windows:
Get the free, full version

Linux:
Get the free, full version

Really, great adventure. Took me on a fantastic voyage of the imagination. Looking forward to the 5 more episodes due to be released next year.

was really obvious although that isn't what's on display here. The developer has done an excellent job in giving a text-based game that "modern" feel. My only qualm is the screen is a bit too jumpy so those with epilepsy be forewarned. Otherwise, excellent game to spend 5~10 minutes with. Definitely worth it.