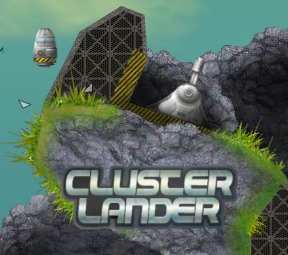 Cluster Lander is a new game from Candystand, part space exploration and part racing game. You have been sent on a voyage to explore a series of "clusters," which are a little like asteroids, and your mission is to explore and retrieve the coordinates that will allow you to continue traveling through space. Each cluster is an obstacle course that you must navigate using your cleverly designed exploration vehicle.

The central element of gameplay is the way your vehicle actually works. The basic controls are simple: Press an [arrow] key, and the opposite thruster fires. The ship has a basic stabilization system that keeps it upright and relatively easy to pilot, but crashing into things or getting hit by enemy fire can destabilize you, which makes it much harder to pilot your ship. Sometimes, though, you'll want to break your own stabilizer on purpose, so that you can orient the ship differently, fit through small cracks, or fire at otherwise unreachable enemies. A skilled pilot can take advantage of the increased flexibility of the ship when it's destabilized, but learning to reestablish your stabilizer is a useful skill in itself. The controls are very responsive, which is great in a game that relies so much on precise maneuvering.

As you wander through clusters, you'll encounter lasers, locks, turrets, and other objects that will stymie your progress, as well as fuel, health, and bomb power-ups that will let you keep fighting. Tap [S] or [shift] to drop a bomb, and [A] or [ctrl] to change weapons. Since the game records your movements as you fly, you have the option of racing against a "ghost" when you try a level again, which will allow you to garner medals by flying faster than your opponent. Playing the ghost mode has a second advantage if you're getting stuck on levels, because it gives you a guide in case you get lost. 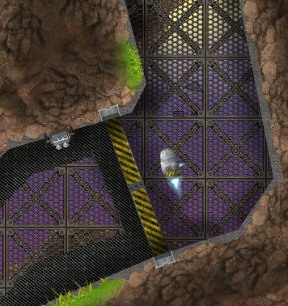 Analysis: Cluster Lander has a great premise, with tight controls, and a ton of replay value. Getting to go through the levels again for better and better times will keep medal fanatics busy, but you can always enjoy poking through clusters trying to find another weapons cache even if you're not trying to beat any specific time. In fact, you might want to take your time; piloting the lander definitely takes some getting used to, and you'll want to get a feel for what's going to send your trusty ship rocketing into the nearest wall before you stomp on the gas.

The levels are expansive and really give you a great feeling of exploring the clusters. As a bonus, hidden caches of weapons, armor, and fuel are scattered around the level, which really gives you that thrill of discovery when you find them at the right time. There are also additional clusters available for purchase if you so desire, but the original free game should be enough to keep you busy, and doesn't require any form of payment to do so.

If the game has a flaw, it's that it's almost too straightforward. Not to say that the game is simple, since the difficulty curve ramps pretty steadily, but it would have been nice to have, for example, an upgrade path to make your lander stronger, faster, or more dangerous. Since the lander never upgrades, the final levels can feel a lot like the early levels. The combat also takes a while to get used to, since you are generally dropping bombs from above your enemies and have to take momentum into account when you're launching them. These are pretty minor issues, though, when the rest of the game nails the exploration genre so dead on.

If you've always wanted to see what lies beyond the big blue yonder, and pilot an extremely fragile spacecraft through dangerous terrain, then Cluster Lander is the game for you, provided your reflexes (and your patience) are up to the task.

the gameplay and the graphics are awesome!
Great Game!

Great game! Only thing I'd suggest to improve it is to make the space bar the bomb drop key. Otherwise, really well done!

This game was pretty nice until you get to the first level with "live" enemies... and there's no -- and I mean NO -- ammunition whatsoever. No thanks, I'll go play something that doesn't hate me for playing it.

What are you talking about? You had to use the bombs to get to the enemies!

Great game, reminded me of thrust.

Did anyone find the level 5 key on the last level?

Very slick game. Racing against ghosts is extremely addictive!
One gripe:
I find the whole business of deliberately crashing to become unstable so you can squeeze into tight passages highly irritating - these actions are too hard to reproduce reliably, it feels a bit like rolling a dice and as a result you never really feel like you're 'shaving seconds off' to perfect your run. This element of chance simply does not belong in a time trial type situation.

Negatives:
The camera is too shaky, got used to it though.

The "turn sideways unstable to get passed" (although good) would have been better if there had been a way to whip the tail up temporarily instead of forcing it by crashing into walls.

What a great quick casual game. Too bad cluster 8 is the only one with any challenge to it. I'd love to play several more, with continuing degrees of challenge and variety.

I too am wondering about the level 5 door at the end of the game... anyone gotten through it?

Looking at it again, that door just opens up to the outer wall, doesn't appear to go anywhere. I don't think I'm spoiling anything to say the game doesn't have an ending. Just 8 levels and the ability to play again to go for a better time.

Really fun until the end where the pod seemed to fly out of control at the lightest tap of the wall. Other levels I would struggle to get up enough speed to get the pod to flip over so I could squeeze through a small opening. I still can't get the level 2 entry card in that timed section.

It doesn't work. I've watched that stupid ad four times now and the game simply doesn't load afterwards. I get CandyStand's vanity card, then nothing.

That's the last time I go to that site.

The game is also on Kongregate. Good, entertaining game, but I wouldn't pay $$ for extra levels. Not that good of a game.