Clowns in the Face

Which sounds worse: tennis or clowns? Ha, trick question! They're both equally creepy in their own way! 10tons totally gets that, which is why the team that brought us the physics puzzle game Tennis in the Face has released the follow-up Clowns in the Face. Now, instead of just smacking things in the face with tennis balls, you're smacking clowns in the face with tennis balls. Neat! 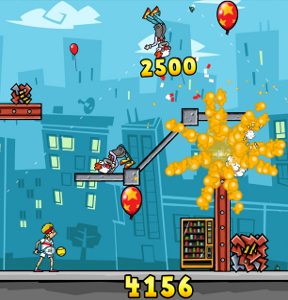 Explodz, the energy drink apparently created and marketed as a joint venture by Dionysus and Hades, is causing problems again. This time a posse of insane clowns has taken over the carnival and scared everyone away. As former tennis superstar Pete Pagassi, it's your job to clean up their act. Tap and hold the screen to aim your shot, then release to send a tennis ball flying. Bounce shots off of walls, knock into vending machines, break glass, kick over hunks of metal and much, much more as you clear each level of clowns and work your way to a peaceful world once again.

Clowns in the Face has everything you could want from a mobile game, including gameplay that's easy to pick up but will take time to master, plenty of levels and achievements to unlock, stages you can replay for a perfect score, and a fantastic sense of humor. The variety of enemies and things to smack increases as you move through the levels, and if you ever get stuck, hopping to another stage is a simple matter. Also, Clowns in the Face contains 50 brand new levels and is free for both mobile users and browser players. Kinda tough to say no, isn't it?

Play Clowns in the Face

This game totally locked up in the middle of the second set of levels.

Mobile or Flash version? If mobile, which device are you playing on? OS version?