From Supercell comes a new strategy game, free for iOS and Android based off of their hit game Clash of Clans. Clash Royale is a fast paced one-on-one real-time strategy game where you build your deck, place your army, and crush your opponent's towers. Win treasure chests to unlock new cards and power up your old ones, form a clan with friends and family and rule the arena by fighting against people from all around the world. It uses all your favorite characters from the Clash of Clans game, but with a completely different gameplay. Your goal is to take out your opponent's king tower or at least have the most towers destroyed before the timer runs out. Winner gets the crowns, the trophies, and the chest to help continue making their army the best there is. You can also have friendly fights within the clan and watch some of the top matches to see how the best of the best is being just that. Learn some tips and tricks and soon you can be leading your clan into glory. 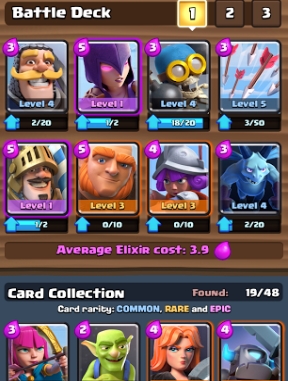 You start off with some basic units, both melee and ranged, but as you go through the tutorial you're given freebie chests to really get you started on your battle deck. These cards are selected randomly by the cards available in the level of arena you are currently in. You can upgrade to a new arena by winning trophies you gain when you beat an opponent. In the arena you can only hold a hand of five cards and each card can only be placed when you have enough elixir. Elixir is gained over time so you have to be wise as to who you set down, when, and even where. You can only place units on your side of the battlefield, until you bust down one of the smaller towers, which increases your range. You can set down your units wherever you wish within your area, but units that are ground-based will always head to the trail and stay on that as they march forward. While in the beginning your cards are basic units, you soon will be commanding flying units, magic based creatures, and even those with area-of-effect abilities. Since the cards are given randomly you never know what your opponent may have up his or her sleeve so be prepared for anything and make sure your cards are as strong as they can be.

Leveling up cards requires you to have a certain number of that same card. The bigger the chest you have the more cards lie within, but all chests have a timer attached with them and you have to wait to open them, and sadly you can only start one timer at a time. This is where the game gets a bit bogged down. You only have four slots for chests, and the base level chest takes three hours to open. The next chest up takes eight! If you battle with all of your chest slots full you won't receive a new one, and you'll only get crowns instead. When you get ten, that unlocks a daily chest, and trophies which gets you closer to a new arena and puts you up against harder opponents. You can keep battling all you want, but if you're not getting chests then you're not getting more cards to make your deck strong, but you will (if you're winning) be getting into much more advanced territory. You can open up the chest with gems, but you have a very limited number of those and gaining them without paying real money is a hard game of chance as occasionally you'll find them in gold or greater level chests. This just means, though, that you can't just sit down and play for three hours straight. It's a game built to let you play just a little at a time. Love it or hate it, that's just how it goes and it's probably good to have you stop because this game is so entertaining and addictive you'd never put it down.

This is one of my favorite games which Supercell has created. I can't just stop playing Clash Royale since it's pretty much addicting.

My account has only reached Builder's Workshop arena and it's way to tough to acquire legendary cards. So far, i haven't had any legendary card yet which is so frustrating.

My favorite combination of troops is Giant Skeleton, and behind it is Wizard :)

We have been looking for the brawl stars cheats