When it comes to action games, Clash N Slash has the makings of a great one. Big guns? Check. Hordes of attacking aliens? Check. Lots and lots of explosions? Check and check. There's more happening on-screen than any namby-pamby little puzzle or hidden object game. This is an action game, for action game players. Do you have what it takes? 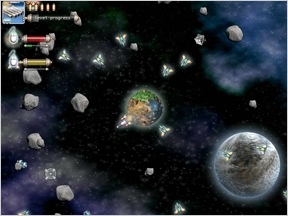 Clash N Slash started life as a flash game and was later expanded to the full-featured download you see today. The concept is quite simple: you control a ship in orbit above a planet. It's your job to defend the hunk of rock from the near-constant onslaught of alien craft. As you destroy invaders, some will leave behind goodies. Collecting these goodies will fill two upgrade meters, one for the planet and one for your ship.

Upgrades are performed on-the-fly, not between rounds like many other games. Once the meters are full, press the right mouse button to enter the upgrade screen. For your planet you can build research facilities to repair damage more quickly and nuclear weapons to help your defenses. The ships can be upgraded with options like faster speed, larger clips for your weapon ammo, faster reload times, etc. The planet's upgrades are of the utmost importance, as your ship can re-spawn an unlimited amount of times, but if your planet takes too much damage, it's game over for you.

As you advance rounds, you will travel to other planets that need protection. Many times you'll also be given access to a new main weapon for your ship. Of course, each of these planets and weapons will start out with no upgrades and will have to be leveled-up as you play. Not only will you unlock new weapons, but you'll eventually unlock new levels to weapons that you already have. For example, the pulse laser fires a single shot that destroys multiple targets in its path. The second level for this weapon adds a spread, allowing it to destroy a wider path of enemies. The latest weapon to be unlocked, while all shiny and new, may not always be the best weapon for the job, and it will be up to you to decide which one to use as you dispatch the alien fleets.

Of course, those pesky aliens are not without their tricks. At first, they sort of float in from space, slowly coming in as you pick them off one by one. Soon, they become organized, attacking in waves, using formations that make you concentrate your fire in one direction while another group comes up from behind. Sometime the enemies will come super-sized, requiring more firepower to take care of than normal ships. You will have to contend with asteroids and minefields, as well. But, luckily for you, the space junk floating in the universe can come to your aid. You will often see barrels floating along with the alien ships. These barrels will do a number of things when hit with your weapon. Some will send out a nuclear blast, clearing away any enemy ships in the vicinity. Some will set off a chain reaction, destroying similar barrels around the screen, taking out any enemies that are within the blast radius of each explosion. Still others will slow down nearby aliens by freezing them, or covering them in green goo. As your screen fills with a seemingly impossible number of invaders, look for these barrels and give them a shot. 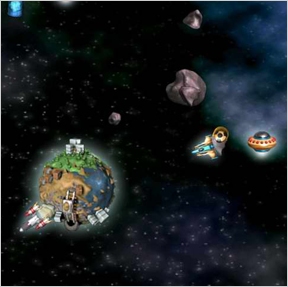 Analysis: Clash N Slash is one of those action games that I keep coming back to over and over again. The mechanics of the game are simple — it's not about precise control of your ship, its all about point, click, shoot, BOOM! In many ways, the game acts like a cross between the classics Missile Command and Stargate. You can be more concerned with simply aiming with your targeting reticule since your ship will rotate as it comes around the planet, allowing you a full 360 degrees of action. And like Stargate, your enemies are constantly coming at you from all directions of the screen, so you have to be vigilant.

Once the action gets started, it really becomes exhilarating, watching explosions go off left and right, hitting barrels and watching them chain-react and take out an entire screen of invaders. This is by no means and easy action title, though. Later levels are truly a challenge, and you will have to work hard to make sure that none of the alien ships make it to your planet. Many times I found myself concentrating on the outer edges of the screen, trying to clear the enemy before they even got close, only to glance back at the planet and realize that somehow one or two ships slipped through and were that close to hitting my planet. Depending on whether or not my weapon was about to reload, sometimes I could get them, other times not.

There is one complaint that I do have. When I would hit a barrel that set off a chain reaction and destroyed a large number of ships on the screen, my game would momentarily slow down. Now, I don't know if this is because of my machine configuration, or the fact that I am running Windows Vista, but it does detract a bit from the gameplay experience, as my ship stutters to its next target. Luckily it's only momentarily, and doesn't seem to affect the rest of the game, which generally runs quite smoothly.

Variety in weapons and in enemies keeps this game from becoming monotonous. The fact that you have to keep upgrading new planets also helps. The chance to see what new weapons are available keeps you coming back for more.

Ready to take out some alien scum? Give Clash N Slash a try. Just keep in mind, we are not responsible for any loss of sleep, spouse, friends, or employment while playing this game.

Although arguably not as good, a sequel is also available: Clash N Slash Worlds Away.

For people who want it, you can find the limited online version here: http://www.clashnslash.com/play-online.html

Have you got a link for the flash version as well?

This game's older than dirt, it's about time it got here.

i agree with wossname above, this game has been around forever. Are you stuck in some kind of time loop?

No, we are not stuck in a time loop, there are plenty of quality games that we haven't reviewed yet.

And we can't review everything simultaneously, so we will get to them when we get to them. :o)

I remember the online version, but I didn't know about the full version. That was a lot of fun... twenty minutes has never gone by so quickly.