Look, strategy is serious business... unless we're talking about Cave of Wonders's adorable and goofy Civilizations Wars 2: Prime, another chapter of Civilizations Wars, only this time with 100% more giant frogs, aliens, magic, and... absconding with the buxom princesses to force her to marry you? Uh... Oh dear. Even if you didn't play the original game, chances are the gameplay mechanics will be fairly familiar to you since we've seen them done before. In each level, you begin with structures that slowly generate soldiers over time, represented by a number overhead each one, and when you click and drag from one building to another, half of those soldiers will go to the place you release the mouse on. If that place is an enemy controlled spot and the number of your invading soldiers is higher than that of the number of foes stationed there, you'll take the structure over, and it too will begin generating more soldiers for you. The goal in each stage is to rout all enemies from the map, and to help, you can cast a few devastating magic spells provided you have the crystals to power them. Simple, right? 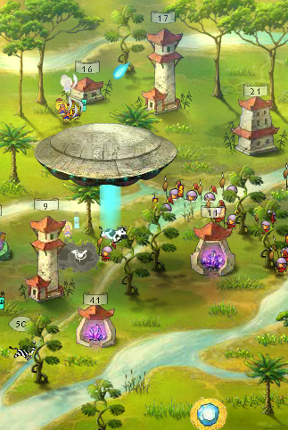 As important to your numbers, however, are towers. Some towers might attack enemies that come near, and fire faster depending on how many soldiers you have stationed within. Other towers might actually upgrade every member of your army that passes through into a stronger unit. Additionally, depending on how well you do in a stage, you'll earn experience towards leveling up, which grants you points you can spend in everything from increasing your basic abilities to spells and more. You can even replay stages with higher difficulty or various handicaps such as no magic or super-powered enemies to increase the experience payout. The series has always been the sort of game that starts off a simple matter of swamping dudes with even more dudes than the other dude (if you'll permit me to get technical), but it can get easy to find yourself swarmed by angry rats and elephant riding warlords if you don't move and think quickly.

The opening cinematic should tell you right off that Civilizations Wars 2: Prime is considerably more tongue-in-cheek than the original game, complete with cute end-of-level animations, though visually it looks more or less the same once you're actually playing it. In fact, it more or less feels the same as well, which is a good thing if you love the series' casual approach to real-time strategy, but also potentially a bad thing if you like to see significant evolution between game installments to stave off that sense of "been there, done that". As it stands, it's still a colourful, quirky game with addictive pigpile style warfare and more of the gameplay fans loved.

I hope "mistery" is some kind of magic thing and not a terrible typo.

Misery and mystery in one, no doubt Shudog!

My question is this--how the heck do you get rid of the sound? On the loading page, there was a mute button, but as soon as the game started, the sound was back on and no mute button to be found. :(

The link to the game within the review is broken.

@dsrtrosy: Click the icon in the top right corner to bring up the Options menu, which has sound controls.

These series used to be superb. Now they are littered with ads, and looks annoying rather than the professional design it had before.