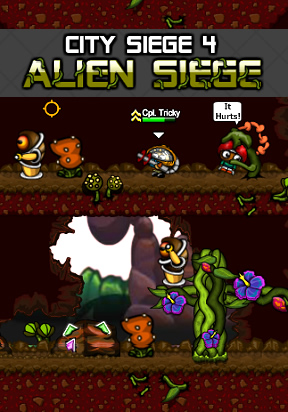 Gameplay should be familiar to those who have played previous entries in the series, but there's nothing to prevent you from jumping right in. Move your troops safely through each mission, clicking to select one and using the [WASD] or [arrow] keys to move, and the mouse to aim and shoot at the alien kidnappers (one exception to this rule is the Mecha trooper, which is totally freakin' sweet and has a melee attack activated with [down]). You can control your troops as a group by hitting [G], teleport troops to you with [T], or toggle between your soldiers individually with [+] and [-]. Blast the enemies before they blast you to clear the level. Collecting all the civilian prisoners unharmed or completing the level without losing any troops will grant you a higher mission rating. The planet has some nice mineral wealth for you to "liberate" as well, and you can spend it in between levels to purchase new troops and upgrade their capabilities. While it retains the feel of its predecessors, City Siege 4 is no mere setting-swap. Many of the troops and their abilities have been redesigned and streamlined to fit the sci-fi theme, and while this does mean losing the Lady Spy (Boo!), it does mean a lot more jetpacks and mecha (Yay!). One negative: the designs of the alien villains are a little generic compared to the googly-eyed Baddies of previous installments. Still, through all its 30 levels, City Siege 4 has awesomeness to spare.

I tell you, the game is good & all (if a bit frustrating at times), but you really miss the Spy from the previous two games.

A great flaw is that you must Collect the gems, or they will vanish. Also, you can't Bombard them with Commando Bullets (And Spy kills. Also Bazooka), and Lazer doesn't work ofscreen (I was used to just shoot upwards and rain shells on the baddies, or snipe them easily from away) The game doesn't look good either, brain-sucking plants doesn't help, baddies weren't that annoying.