Long has it been dictated that a woman in a fairy tale had better be either beautiful, meek, humble as apple pie, or a mix thereof. Someone hates her, a prince wants to save her, and some sparkly fairy dust is going to cause some type of dilemma. Throughout it all, this princess is going to hmmm and sigh but ultimately go along with the ride because, hey, she's a damsel in distress and you best not forget it! Fortunately for us, MoaCube didn't just forget it, they threw it out of the proverbial tower turret to the alligator infested moat below. In the team's dazzling visual novel Cinders, they charge headfirst into the outdated and come out the other side with brand spanking shiny and new. 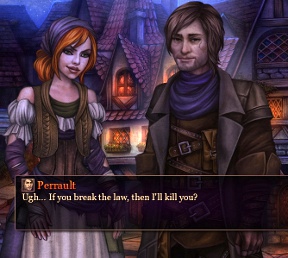 While this game is based on the story of Cinderella, MoaCube has given her a rebellious streak and a tendency to wax philosophical. Cinders is a modern day story book with the addition of choices and a few new faces to the cast of this beloved fairy tale. Each decision will effect personal relationships and your ultimate ending, as well as possibly earn you trophies. In the dialogue when you come to a point of speech that has been affected by a previous choice, a flowering vine will appear in the upper right corner. At any time during your play you can hit [esc] or right click to bring up the menu where you can save your game, change screen size, adjust sound and music volume, and quit to the menu. Hitting the [up] arrow key rewinds the text, while [ctrl] skips through previously viewed passages.

Analysis: It's important to emphasize the novel part of the visual novel description. Cinders is much like reading a book, only you have a myriad of choices and the ability to change the outcome of your happily ever after. While there are a whopping 120 instances where you get to choose your own path, sometimes it feels like it's too few and far between and only occurs in chunks after mass amounts of text. Don't start thinking that there's not much room for maneuverability though. There's multiple different endings and personal relationships that can be built through the course of the game. 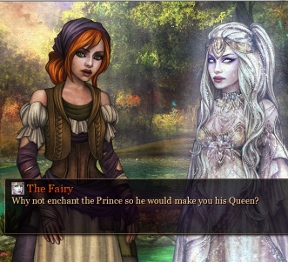 Now, first and foremost, it's absolutely necessary to mention how unbelievably gorgeous the scenes are for this game.From the town to the forest, artist Gracjana Zielinska has given players a stunning and breathtaking backdrop to be mesmerized by as you guide Cinders through her chaotic struggle to find freedom and independence. To further the beauty of this game is a soundtrack crafted by Rob Westwood that heightens every point, whether low or high. The story, while not new, takes an amazing twist with having Cinders being more than an unwilling slave in her own home. Instead she faces the perils of adulthood and learning the difference between the joy and price of freedom, the cost of duty, and what independence really means in a world of sacrifice and secrets. It makes all those CW teen dramas look pale and whiny in comparison.

Even if you're not the biggest fan of the fairy tale side of things, or you aren't always keen on a female protagonist, push aside your aversion for a moment or two. Cinders offers hours of game play, and with a fair amount of possible endings, you'll find yourself going back to see all the paths you could have taken. All those what-if moments you have in your own life don't exist here because you can go back and fix any mistake you want. Now, there are no singing mice and there's sure as heck no bippity-boppity-booping, but that's part of the great lesson of the game. When do you let go of the fantasy of childhood and replace it with the harder lessons of being in reality? Maybe Cinders won't be the only one having an epiphany after the end of this game.

Played through the demo before and I'm really happy to see this here! The lip flap animation is kind of horrifying, but the rest of the art is gorgeous.

Quick question: I'm guessing some of the personal relationships are romantic in nature. Any with other girls? I'll still play it either way, it's just a nice thing to know going in.

During the course of my multiple play throughs I didn't encounter any female-female relationships but that doesn't necessarily mean there aren't any considering there's a lot of branching in the story line. However, I wouldn't expect anything to be available with the step sisters, and the fairy seems rather asexual. The only option I could see would be Madame Gheda but as you'll learn through the dialogue she's in a bit of a maternal feeling area for Cinders. However, happy play through because you may very well discover something I didn't! If so please feel free to comment because I'd love to know if there was a branching romance that I missed!

Hi, one of the developers here :).

Thanks for the review. There's no girl-girl romance in this game. It wouldn't really fit the characters, with most of the in-game women being a family.

Just played through the demo - this game is really stunning. Although the cost of the full version is more than I'd normally be willing to pay for a casual game, I really think the developers have earned it. I especially love the music - got shivers several times already! Beautifully done :)

Wow! The character design isn't something I'd go for usually, but the whole feel really pulls me in!

That's a rather high price tag, but after the demo I'm seriously tempted...

Oh, and I really love how smooth auto mode is (and just the right scroll speed!)