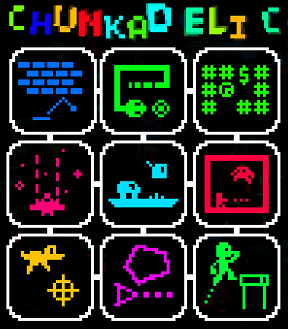 Here at JayIsGames, we're always in the mood for a cavalcade of pixelated arcade fun. But, you know what? Sometimes we like it to get... a little funky. Enter Chunkadelic, developed by Noel Berry and Chevy Ray Johnson for the Full-Indie 48-hour Game Jam. It's one third Atari, one third microgames, and one third discotheque. That adds up to a work that's 100% a love letter to retro-gaming... A love letter with an atypical amount of strobe-lighting, but a love letter none-the less.

Chunkadelic takes you through a series of 9 minigames, each one inspired by a classic of gaming, ranging from Asteroids to Xevious. All are controlled with the [WASD] or [arrow] keys. While specific instructions aren't given, the inputs should be intuitively familiar to most gamers. (An exception seems to be the Super Mario-inspired level, which has proved a stumbling block for some players. For the record, you must alternately tap [left] and [right] to build up the speed that will allow to leap over pipes with [up].) Admittedly, Chunkadelic relies heavily on its spectacle. However, it is pretty good spectacle, so it genereally works out well. The feel is quite reminiscient of the Space Invaders Extreme series, so much so that it wouldn't be surprising if it was a direct inspiration. Overall, Chunkadelic is kind of ephemeral, but it's hard not to be entertained by it's prettiness. Turn off the lights, turn up the sound and get groovin'

If you don't want unnecessary distractions, avoid the duck hunt level for as long as you can, because the background ducks remain in subsequent levels. That can be very confusing in asteroids particularly, and especially if you're playing for the first time.

"to leap over pipes"
I'm pretty sure there are just hurdles seen at an angle.

A bit disappointing there isn't even a 'congratulations' if you win all 9 games..

I believe the "Super Mario-inspired level" is actually a Track & Field inspired level. Track & Field is an *old* game where you got to compete in track and field events in the Olympics. The original arcade game and subsequent computer ports required you to alternate button presses in order to make your guy run.