The golden age of platform games came and went a few decades ago (you know, Mario, Sonic, all those guys). Since then, platformers have struggled to find modern relevance. It took the likes of LIMBO and Braid to resurrect the sidescroller, and since then we've had a miniature golden age where the platform game has begun to shine. Only now, instead of twitch reflex action it's all about puzzles! 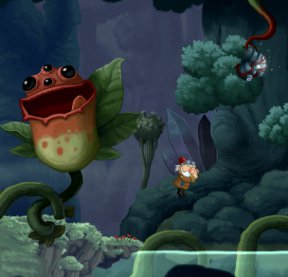 Chronology is the latest game to take advantage of the sidescrolling invigoration. It packs a lovely time-twisting mechanism on top of a head-warping set of puzzles that force you to think about the world in terms of the past and the future. You control an old inventor and a large (but cute) snail. The inventor has an item that lets him toggle between two time periods called "before" and "after". At the press of a button everything morphs and adjusts its age. Platforms retract, machines get restored, and items you move around change in appearance and function. You can even switch times in mid-air, opening up tricky blind leaps that are immensely entertaining to pull off. The snail can stick to surfaces and crawl all over the place, but it can also freeze time, which is exactly as useful as you knew it would be!

Chronology has a sublime set-up and is coated in morphing artwork that will made you nod in heavy appreciation every time you see it. What it does with those elements is what makes it such a special experience, however. Puzzles are much more than rudimentary buttons and switches, they incorporate elements from the environment in some creative and challenging ways. Guard blocking the way? Hop around in time, break a machine beneath him, then skip on by as he coughs up a storm. The story portion of the game only lasts about two hours, which is a bit of a shame since it's so darn good, but you'll relish every single minute of storytelling, pun sharing and time toggling.

This looks so lovely, I had to have it! Good for a way to wind down after Leo's Fortune. It's nice to have a platform game that needs more mental than dexterous skill.