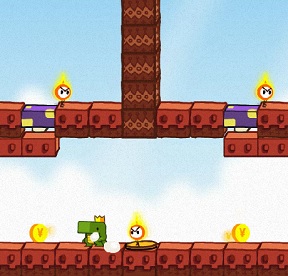 Move Chompy with the [arrow] keys and jump with the [spacebar]. There are a certain number of coins in each level to collect, and you must do so as quickly as possible in order to get the special crown. Later levels introduce bouncy mushrooms, pushing conveyor belts, fiery enemies, and other obstacles to your mission. There are 30 levels in all. The first 15% of Chompy left me feeling meh with over-familiarity, so I was surprise how it was able to win me over following the initial speed bumps. A lot of it has to do with presentation: there's just a real sense of joy from the characters, effects and animation that's infectious in the best way. (One supposes we could add the music too, though its particular brand of Jungle Japery should probably be credited elsewhere...) When the levels open up from a single screen, Chompy comes to life and, almost in spite of myself, I enjoyed racing the clock to fill up the coin meter and make the little reptile flip with joy. The ever-more elaborate levels keep things interesting, even if the difficulty never climbs particularly high. In short, Chompy is a fun platforming romp, with a level of shine in its mechanics to distinguish it from other similar works. And that's no crock!

I am assuming that you DID ask Nintendo for permission to use the DK theme song right???

"We" did not make the game, though it was noted in the review that the music should have been credited. :) However, a little Googling turns up this from the official Nintendo site:

"Although we are not able to grant permission, use of Nintendo's properties without formal permission by Nintendo may still be allowed under the relevant laws of the particular jurisdiction involved. Thus, we encourage you to seek your own legal counsel if you have any questions about whether your particular proposed use is permitted without Nintendo's authorization. Nintendo cannot provide legal advice."

Whether this falls into that category, I can't say.

Not working for me. It starts up just fine, does a little intro, but on the menu screen I can't hit the sound off button because there are grey bars in the way. Then when I hit play he says let's go, and the screen goes white with a couple HUD bars and just stops there. I'm using Firefox.

Sorry you're having problems! The game plays fine for me in Firefox. Did you make sure it's updated and do the same for your plugins? Maybe try clearing your cache?

Anyone else finding the game a little choppy? I had to restart one level three times because the controls were lagging.

I found the weird sped up walking and the jerkyness associated with it really hard to deal with :/ is this just me or is this some weird kind of lag?

Yes, very weird choppiness to it, some of which seems intentional. It also seems like it should carry a seizure warning, lots of twitchy flashing.