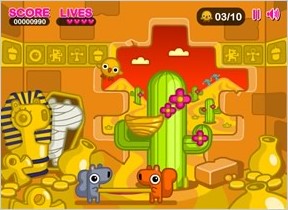 From Nitrome, the same Flash game developers that brought you the previously reviewed Roly Poly, Sandman, and Hot Air, comes this next game that features adorable characters adorned with rich saturated colors. Chick Flick is an action game of rescuing little chicks by bouncing them on a trampoline up into the safety of their nest.

Choose between using the arrow keys or the mouse to move the trampoline-holding-squirrels back and forth as chicks and various other items fall from the sky. Two-player cooperative mode is also available by utilizing both arrow keys and the mouse, though with a smaller trampoline apiece.

Save the chicks and don't let them hit the ground or lose a life. If you don't get a chick in the nest quick enough, more chicks will begin to fall. Save the required number of chicks to unlock the next level. Five (5) lives is all you have to unlock and play through all nine (9) levels in this charming game brimming with cuteness.

Here are some tips to get you started:

Analysis: The graphics are gorgeous and the game is enjoyable for all age groups, though it may seem a bit slow at first for the more hardcore gamers out there. A model casual game, Chick Flick incorporates a simple and accessible gameplay mechanic that will be immediately familiar to anyone who has played Breakout or related games, and yet there is surprising depth to enjoy here. I like how later levels add complexity that affects how the various items bounce around the play field, which gradually increases the challenge of the game.

As is the case with all of Nitrome's games, Chick Flick sticks to the compelling and successful formula of presenting multiple levels to unlock, which gives the player an easily identifiable goal and reward structure. Excellent casual game design, as usual, from Nitrome.

this game... is brilliant.

it was a little glitchy around level 5 with the chick getting caught in the top right corner, without any other chicks being re-spawn.

I've played this previously, when you first reviewed a game on that website, and I got pretty far. It's a decent game, and fun. But I noticed that if you have a bit of bad luck in getting a chick to the nest, it tends to build up to the point where you just have to leave it.

That said, the pun that is the name kinda makes me groan.

I have many different levels of hate and compassion for this game. Mostly hate.

I hate it when:

1: I get multiple bombs on screen
2: I get those remarkable fat birds
3: I play the candy level
4: The little fatigued squirrlies don't move as fast as my mouse
5: I lose and I see the little imbacilic birds die
6: Kill two birds, running for an extra life

Yeah! #23 on the hi-score board!
also, I found it strange that on the 3rd level if a small chick hits a bumper from above, then it will just fall through.
Weird.

4: The little fatigued squirrlies don't move as fast as my mouse

That's the one thing that bothered me the most too.

There's a "Bandwidth Limit Exceeded" message, unfortunatley. The whole site is down!

its dead. the game says unavailable

*sigh* bandwidth has exceeded.. guess I'll have to check this out another time.

Problem solved. Save those chicks! =)

I didn't like it that much... probaly because i'm not so good at it :P

It's a very creative take on a classic game, I like it, despite my inability to get past level 5.

I have to say, the last level was dissapointingly easy.

The last level is technically the eighth, not the ninth. It's a graveyard, and it has random ghost-chicks flying about, which, when touched, momentarily stuns the squirrels. When a chick of any kind touches a ghost, it stops dead in horizontal movement and heads straight down.
But, this can actually make it easier. Aside from touching the ghosts yourself, the ghosts can make it extremely easy to get into the nest, by giving you an alternative target to aim for.

As for the ninth level,

Even more disappointing. It's a survival-run in an acorn-horde, you have to catch acorns. And it just goes on like that, no limitations or bonuses special to the level.

I love this game!
I'm so glad I found this site it rocks!
Good Job Jay

I'm glad you found us, too!

I love this game, I have been playing it like 5 minutes and already I am on the 4th level.

Does anyone else hate those eggs and tiny little chicks? I find the fat ones easy, because you can guide it easier than regular chicks. I love the game, even though I never got past the 1st level. (Saw the game on here, played it for 5 minutes, came back here) Can you get mulitple eggs and fat birds at a time? That would be murder!

I am nearly finished the game I am on the second last level, I don't think it's to hard but there is some levels that are hard like the one that I'm on. I get a bit bored with this game after a while and I'd imagine other people do to. And yes Loofy I do hate the little tiny chicks, I also love the fat birds well chicks in the ice level coz they can't touch the top so that means that with them chicks the icey part can't fall of.

Late to the party, as usual.

I wanted to like this game - it reminded me of the old Nintendo handheld game-n-watch game FIRE! which was my first video-game obsession and is still my favorite ever - but I just found it maddeningly frustrating to play.

The result was I couldn't get past level one - not even close - in three tries, and I wanted to pull my hair out by the end of it. Very cute idea - I love all the special items, worms, eggs, and so on - but horrible, horrible implentation.

I've been playing this game for months, completed it lots of times, and yet, I'm still not bored with it. I just find it so addicting! Anyway the real reason I'm posting is this: Does anyone know how you get the hot air bonus? Once you've lost all your lives, you come to the score screen, gives you your score, and at the bottom of the bonuses, there's a little Hot Air balloon bonus. Who knows how to get it? IT'S DRIVING ME INSANE!!

alex: They rarely appear- they give you 500. I've only EVER had two, and that's in my total five hours of playing. :0

I can't believe it! 19035 was my score, I was grinning and BOOM! the game glitches and a small chick gets stuck! I wait a couple of minutes- no difference.
I could have added much more to my score.

This one is quite unusual. It hasn't got that Mario World pixelly appearance. It has the Pie Craving appearance.

the ice level is EVIL . I keep on getting icicled on.

btw, this is my first comment: I love this site so much, after months of using it without an account, I finally decided to sign up!
thanks for posting the game, Jay!

[Edit: Thanks for signing up with us, POD! :D Good luck with this one, I'm sorry I can't help with it. -Jay]