Something of an unusual, one-shot kind of game, ChessCards combines playing cards with chess rules, creating a puzzle experience that takes some time to wrap your brain around. You start with a massive field of playing cards, each laying face up and waiting to be moved. Your goal is arrange it so that each suit is on its own row. The catch is that cards can only be moved according to their assigned chess piece patterns! 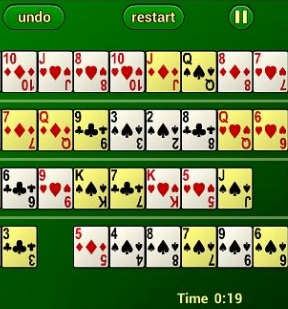 The rules are thankfully quite simple: even numbered cards move like pawns (one space in any direction), odd numbered cards move like knights (in an "L" shape). Jacks move diagonally like a bishop, and the king and queen cards move like their chess counterparts. In practice, you'll move, re-move, arrange and re-arrange every card on the board a number of times, almost like solving a Rubik's cube or a sliding tile puzzle, before you get it right. A full game could take anywhere between a few minutes to half an hour or more!

It takes some time to get used to the unusual movement rules, but once you do, you'll find yourself in the midst of a game that forces you to think several moves ahead. Unfortunately, apart from this one mode, there's very little else to keep you occupied, so it's definitely a one-trick game with few bonuses or other niceties. Still, when you've got a main game this intense, it's probably a good idea to leave out mini-games and crazy storylines so we can focus on the task at hand!