In free indie horror adventure Chelsea by Yūrei Darling, In free indie horror adventure Chelsea by YureiDarling, Daniel's finally ready to propose to his girlfriend and childhood sweetheart... only he seems to have misplaced the ring. There's nowhere left to look but their hometown of Angel Grove, but things have changed since they moved away a few months ago. To play, just use the [arrow] keys to move, the [spacebar] to interact, and [ESC] to open the in-game menu. You can save whenever you come across a glowing pot of flowers, and you'll definitely want to, since it's very possible to get a fatal GAME OVER at certain points. What lies within this foggy, quiet town? How did Daniel's ring get lost? To answer that, you'll need to brave the unknown, and face the truth. 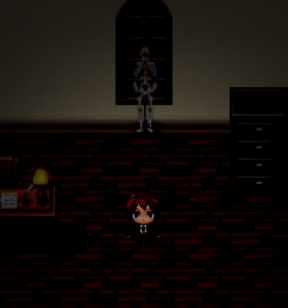 In terms of atmosphere, Chelsea is solid, if a little goofy... you'd think the first whisper of really disturbing weirdness, which happens fairly early on, would send him running for the hills since there's nothing physically stopping him from leaving and hitting up a jewelry store with markedly less staring eyes, spectral hands, and shadow creatures. The game makes excellent use of lighting, however, so it's still easy to get drawn in, especially thanks to its frankly stellar original soundtrack. The story's foreshadowing is fairly heavy, but the intriguingly weird situations and some genuinely tense sequences make it easy to stay engaged through to the end. It knows how to make your skin prickle and even make you panic a little, and without resorting to buckets of gore or shock value to boot. A lot of the game's core themes come together nicely in the end, helping you make sense of the things you've seen, so it feels like despite a lot of initial confusion, Chelsea wraps everything up admirably and lasts just as long as it needs to. 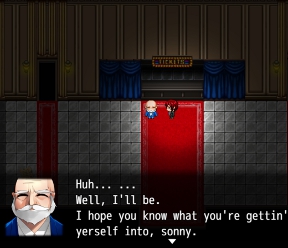 Most of the puzzle solving comes down to you having thoroughly explored your environment. There's a tendency for the game to give clues (some of which will require you to have your sound on to hear them) or items that you may not know what to do with if you haven't exhausted every place you can visit. You need to pay attention to everything if you want to avoid a game over, and sometimes this is less intuitive than it could be when it comes to making a connection between something you might have read in passing in a different location a while back. It's the sort of thing that can either make you appreciate the clever bread crumb trail the developers were leaving for you, or going in frustrated circles. Despite that, and a few annoying chase sequences, Chelsea is still an extremely impressive debut title, and from a two-person team, too. Chances are it'll only take you an hour or so to play through, but with a satisfying ending and just the right amount of scares, Chelsea is just the right size for a creepy evening of play.

This game is a nice little jump-scare gem that can be completed in less than an hour. It is very similar to the style of Blank Dream and the White Path.
If you play this game and enjoy it, I would recommend Blank Dream for a similar experience that is 3x as long. It just depends on how much time you have to chill out, relax, and scare yourself silly :)

1. Theater
2. Library 2nd floor, blank book on bookshelf
3. Schoolhouse, laying on the floor in a classroom

Save often because you can only walk and the things coming to get you are a little faster than you so you may want to strategize.

Well done on the game YD!

3,997 Views
0 Comments
chrpa— Jayisgames needs your help to continue providing quality content. Click for details Welcome to Mobile Monday! Goro Sato's game, similarly as their previous one, is a good classical escape with an attractive looks and a magical atmosphere. The next...  ...