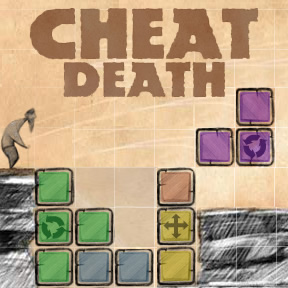 Let's face it: nobody lives forever. We're young, then we're not, and then we're gone. Faced with this morbid fact, many people have sought out the proverbial "Fountain of Youth" to try to stave off the inevitable and cheat death. To date, no one has been successful, but studies have shown that puzzles and mental games do help to reduce functional decline as we get older. Enter Garbuz Games, the developers who take a little bit more time from your life by presenting their latest life-seeking, brain-enhancing puzzle game, Cheat Death.

In Cheat Death, you control the fate of a pencil-sketched man on a cliff trying to get to the "elixir" on the other side before he rapidly ages and turns to dust. To help the man get to the potion, you must manipulate a series of floating Tetris-like blocks and use the mouse to click and drag them into a specific area. Once formed, the man will hike across the path, reach the elixir, regain his youth, and "cheat death" until the next level.

This type of puzzle concept has been done before, but not in quite the same way that Cheat Death presents it. The gameplay can best be described as a cross between "Rush Hour" (the sliding puzzle game, not the movie) and Tetris. Initially, dragging the pieces into their neat formations seems relatively straightforward, but soon additions spring up to make things challenging. First there are immovable blocks in the way, then a few pieces aren't allowed to leave their boundaries. Later, certain blocks need to be rotated, and then there are pieces that require you to alter their physical shape to fit properly. Every level has at least one solution and a limited time to fit all the pieces before your young man turns to dust. 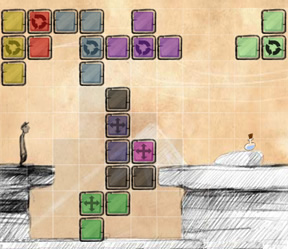 Analysis: I really dig the presentation and gameplay of Cheat Death. It uses a minimalist pencil-sketch style for its character and backgrounds, and the animated wind whisps makes the game feel more alive. The short repeating music has an ominous, Eastern-European flair to it, heightening the tension and surreal quality of the puzzle and situation. The puzzles themselves are nicely ramped up, gradually introducing new pieces and challenges. I found that some of the levels require a bit of trial and error, but thankfully the time restraints (between 30 seconds and 5 minutes) don't seem to get in the way of this. Getting everything to fit just right is satisfying, and the number of levels provided are not underwhelming.

Like most casual games, Cheat Death is not without its issues. The sliding controls are not very intuitive (they sort of drag across the screen like heavy steel girders), though it's something you get used to after a while. There's also not a lot of variety to the backgrounds, and the music can get repetitive after a while. On a personal note, I would have liked some sort of story to go along with the levels — Who is the pencil-sketch guy? Why does he age so rapidly?

Regardless of these issues, Cheat Death is a fun casual puzzler that Tetris and tangram fans alike should enjoy. While you may never be able to truly find eternal youth, at least these series of mental challenges should help reduce your functional decline during your coffee break.

Update: Since the review was written, GarbuzGames has uploaded a new version that makes the game a lot more speedy to play. The lag in dragging the blocks has been removed, and the man now sprints to the "elixir"(!)

Very pretty, but the drag time is so slow, I can't even get the pieces of Level 2 in place before the 30sx runs out. What? If the drag rate is going to be that ridiculously slow, then the time allotted should allow for the mechanics of the game.

I didn't have any problems with the drag rate. I was a little thrown off by only being able to drag it horizontal and vertical, but I guess thats just so that you can't glitch a piece and mess up the game or something.

I personally didn't like the artwork (I don't really like ANY of the artwork from this developer) but I enjoyed the game. I've played similar ones where you get basic pieces and you have a small rectangle to fill, but I haven't played a version like this with nooks&crannies as well as the movable piece on the main block.

4/5 'shrooms because of the high difficulty curve (mostly due to time) and the very boxy controls.

I like this game. My minor annoyance is that the blocks rotate in the opposite direction of the rotation arrows. And occasionally when I start a level, I get the "Try again" message. It'd work when I click it, but it takes away a bit of the shine.

If you reset the time also resets so there's no difficulty there. In fact, the game itself is just too simple, with too many ways to win. There's a few difficult levels, but for most of them, you really don't need to think much to win. There's no aha! moment when you complete a level. The gameplay though nothing special, is workable, but the levels themselves are bland and unappealing. Speaking of bland, even if you are trying to set up a depressing atmosphere, at least try to animate the shapes/background a bit more.

Pretty fun game. But the interaction speed is on the slow side and imprecise (does not follow actual mouse path). The walking animation upon completing a stage is also slow. Players want to get to the next stage, not wait (so long).

The aging of the character is a nice touch. I would have like to have seen more effort put into that though. A nice slow progression, instead of swapping between only 3 forms. Maybe double that.

The music. I turned it off. Personally I prefer games to have an on/off switch for music and sounds respectively. Often the music is annoying, but you still want to hear other games sounds as they give hints.

It was OK. The drag time is a bit slow. But mainly ... I can't play games with timers. That's all I can think about, is the timer running lol

Hey ... The controls have been fixed. It's much faster now!

Wow, block movement really is much faster now. Even the old man basically sprints to the elixir now!