Epic Llama's turn-based strategy RPG Champions of Chaos 2 casts you as a pair of unlikely heroes out to join the rebel army and improve its reputation enough that neighbouring kingdoms pledge to your cause. Right after you raise these battle llamas. And upgrade your cheerleaders. And do the robot. With a heavy focus on grinding and strategy, Champions of Chaos 2 is a simple yet surprisingly engaging RPG with a lot to offer. Note that only two character classes are available for free. You must like the game on Facebook and approve it on Greenlight (or at least tell the game you did) to unlock two others, while the other five are only available if you purchase the premium edition. 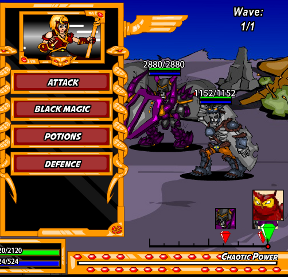 In each kingdom, you'll have to battle your way through a series of tough bouts to prove your worth to the area's ruler. Gameplay is relatively simple. Battles are turn-based, and when your character's turn comes up, you select the action you want them to execute from the menu that appears, and then click on whoever you want to perform said action on... whether it's a beneficial act on a party member or an explosion in a deserving enemy's face. Hit points and magic points are familiar, but you also have a Chaos bar that fills with every action, and will allow you to summon your character class' Totemic Beast when full. As your party gets stronger, you'll level up and learn new abilities, but that's not all. You can buy a combat llama to participate in Llamadrome battles to earn extra cash or special items, grind levels to get stronger to take on the city's heroes to build your reputation, and if you don't mind one-sided cheesecake, you can buy a pair of (increasingly) skimpy cheerleaders who confer various bonuses on you during battle. I dunno. I'm pretty sure the llama would have done a good job with the pom-pom and looked just as good in a shrinking bikini top too. 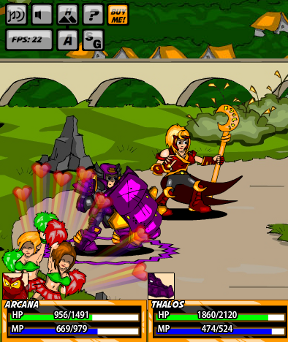 Analysis: In a weird way, Champions of Chaos 2 sort of reminds me a bit of the very first Final Fantasy, though sadly lacking in guys named Garland ready to knock you down. How difficult the game is largely comes down to the character classes you choose at the start of the game, and each of the available characters has a satisfying roster of unique skills and abilities that means changing your play style depending on who you have. Mages might have powerful magic abilities, for instance, but are weak enough physically that a party composed solely of them might have difficulties, while the Paladin can dish out melee damage but is primarily a support class that can protect and enhance the party in various ways. Of course, that's not to say there won't be a lot of grinding involved... because there will be a lot of it. But with two different possible endings for each character depending on your decisions and a lot of potential strategic combinations, you'll find a lot to sink your teeth into as well.

It can feel like the game is nagging you a bit, with so many characters locked unless you promote or pay. It's not that the game has premium content, it's that it has both premium content and requires you to like them on Facebook/approve on Steam Greenlight for the rest, which seems overboard. One or the other, Champions of Chaos 2. One or the other. Still, there's a lot of gameplay to be had in this free version, and that's nothing to sneeze at. Each of the five kingdoms has their own set of challenges, from party battles to the Llamadrome, and even unique heroes to fight in the tavern. The premium version, in addition to unlocking five more characters with unique attacks, strengths, and weaknesses, also offers what is essentially a "New Game +" mode, allowing you to play through again with your previous party against more powerful enemies and bosses with new attacks.

Champions of Chaos 2's emphasis on combat and the relatively straight-forward repetition of battles isn't a bad thing for players who like streamlined turn-based gaming, but it does mean you'll figure out pretty quickly whether or not it's your thing. It's clearly a labour of love, and the effort gone into everything from the presentation to the simple yet addictive and quirky gameplay is remarkable. If you're a fan of turn-based RPG style combat, llamas, big spells and bigger damage, then this is one snappy little arena fighter that's well worth a round or two. Be sure to vote for it on Steam Greenlight if you'd like to see it for sale through the service.

If you want the Paladin and/or Bard, you just need to follow the link from within the game; you don't need to actually "Like" or "Approve" (I don't think there's a way for flash games to track this).

The creators of this game REALLY need to proofread. I keep finding words that are misspelled.

That's true, you dont have to actually "like" or "approve" the game to get the characters, even if you click the button "no thanks" instead of "done" after clicking the Facebook page, the game tells you that it will give you the characters anyway... but if you want to like our page later, or approve us on green light... it would be like... awesome, and we will really appreciate it!

It seems like the enemies build a Chaos meter like the players, except they get to keep it between battles and occasionally just start a battle with a sort of Totem strike that wipes the party (or one-shots the Llama, as the case may be).

The quality keeps lowering itself. It's a bit annoying.

i kinda like that but, having a full half the game 'hidden' half the chars saying 'here's what you COULD HAVE, but nope'... i understand you wanna push to sell, but having like, half the game (or cast, haven't made it far) as a 'premium'... some games do it nice saying 'you unlock extra by going premium'... then there's games that shove your face in it, and actually make me feel rather irritated to play them. It looks fun just have to get into it.

After beating it, I gotta say that the ending is great. The drawings of the characters I played through with at the end were nice.

That said, some aspects of the gameplay annoy me. Dodging an attack but still getting affected by the status it inflicts, for one. Bosses being pretty much immune to all status effects is another.

Has something happened to this link? It seems that it works for everyone except me?

I get halfway through the loading bar, then the screen blinks and nothing ever happens; just a title screen forever.

Tried it on IE and Firefox, updated flash just to make sure, disabled adblocker, but it just won't start...

Anyone know what the difference is between the endings? You can effect how it ends with the cutscenes choices. Is there really much a difference?