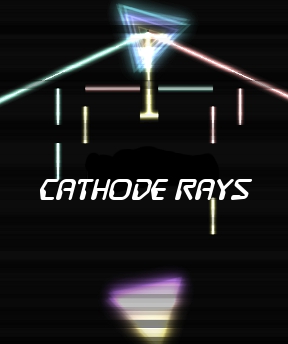 Cathode Rays is a Unity-based game by Christoffer Hedborg that could be best described a puzzling avoidance game. Or, it could be described as a LAAAAAAZERRR SPAAAAYCE BAAAATTTLLLLLE!!! Of course, if it is the latter, it's a very colorful laser space battle. (WIIIIITHH COOOOLLOOORRRRRRR!!!) In either case, it takes a steady hand and some quick thinking to pass these tests with flying colors. (COOOOLLOOOOOokay, enough of that.)

Each level features a series of light-emitting planks that always rotate to face your mouse's position. When you hover over the hollow starting triangle, the planks spring to life, and you'll have those titular cathode rays in your hands. Your goal is to weave your way through the other planks to the glowing target triangle. The trick is that as you move, the cathode rays can't touch planks that aren't their own color. One false move, and *pop*, you've got to go back to the start to pick up a new set of rays. The good news is that when a ray crosses a matching-colored plank, the plank absorbs the ray, meaning you have a little more slack in your movement (until your mouse can reconnect with the ray). 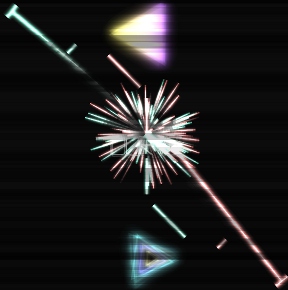 Analysis: Cathode Rays starts out simply enough (with only one ray to handle), but the difficulty quickly ramps up as you're required to thread the rays through tight passages and time your movements to match moving and fading planks. Soon you'll be trying to manage four beams at once in sparkly vector glory. While it might seem like a straight-up avoidance game, Cathode Rays both encourages and rewards thought and planning. The layout of each stage is carefully planned and rarely feels like you'll need to flail about and cross your fingers.

While it sounds like some sort of formula for the perfect rage-quit, the lenient approach to letting you restart merely by moving your mouse back over the starting triangle goes a long way towards keeping things from being frustrating. It's still a very simple game, however, and the slow pace it demands isn't going to be for everyone. The colourful 80's arcade-style visuals and electronic soundtrack are nice (apart from the frenetic jittering), but they almost feel out of place with the gameplay, as if they would be better suited to light-bike races or saber battles. Still, the game is simple and beautiful and just the sort of thing to get you psyched up for the weekend, even if you may walk away with a strange urge to dig out your neon green leg warmers and FRANKIE SAY RELAX t-shirt after playing.

This game is not for the color blind....

I only wish that I was able to play it on a cathode ray tube screen, instead of my laptop, but hey, you can't have everything.

I can't be the only person who was amused that the review immediately before this one ended in this sentence. Turned out quite prophetic in an odd way. Perhaps the next game to be reviewed will be about leg warmers.

The jitter, combined with the fairly weak colors, makes it very difficult for me to distinguish between the various colors.

Please, developers, don't let your graphics get in the way of your gameplay. :-(

Okay, even though I can barely tell the colors apart, I still find this enjoyable. It's like navigating a maze with no walls, but the beams indicate where you can and can't go.

I'm up to the level "Broken". Can anybody help me here? (Thanks!)

While I understand the complaints about the jittery style and the way the colors are very difficult to tell apart, this was not a problem for me.

However, I did find the weakest link to be the inability to select your level. I stopped playing, came back, and accidentally selected "Play" instead of "Continue" (don't ask). Then I thought, oops, I don't want to start from the beginning again, and realized that I couldn't return to the one I was stuck on (Pieces - tricky one!).

Barring that, I think the color problems could easily be resolved (and it could still look amazing) if it could be reskinned retro-style like BIT.TRIP games or VVVVVV. Keep the great music (which I found very relaxing), just use bright colors with solid lines instead of the shakiness, and put all the art into the particle effects for starting and ending a level, level transitions and of course, when you break a line.

As for the game, however - I think it's another extremely original and well-designed puzzle with great levels that really make you think in a new way. I'd love to see more of this.

I seem to be stuck on Motion. Any help?

My best so far:

Can anyone do better?

I'm not able to beat the 'Motion' level!

Looks great but I can't see any difference in the colors at all.